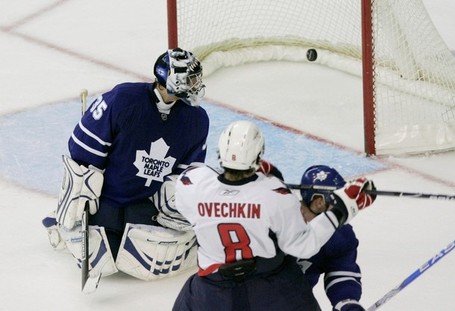 Vesa Toskala should have made some saves in November, when... nevermind.

Fresh off of saving his stick from a dangerous overheating problem, Alexander Ovechkin and the Capitals make their way to the ACC tonight. I should warn you however, that Ovechkin has 13 goals in 14 career games played against the Leafs, and Toronto is at home on a Tuesday night. I'm going to go ahead and call the score at 6-1 Washington right now.

For the Leafs, the usual crew are injured: Hagman, Van Ryn, Kaberle, Heward, Kolzig, Toskala, and Frogren. The Capitals seem to be over some of their injury woes of the midseason, missing only Brashear, Brent Johnson, and Boyd Gordon.

According to Japers' Rink, Alex Semin and Matt Bradley have the flu, so depending on your hopes and dreams for this season you can hope that either A. the Caps all have the flu and lose bad, B. the Caps give the flu to the Leafs who lose every remaining game this season.