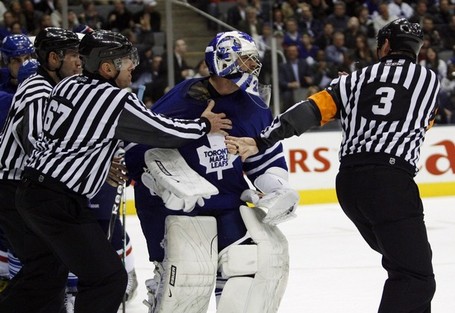 I missed the first period but from all accounts the game that crescendo to a roaring finish began with a pianissimo passage. Phil Oreskovic's first career NHL goal raised the temperature of the game as the Capitals seemed to realize that they might actually have to put in an honest effort to beat the Leafs. Ponikarovsky and Grabovski picked up assists to continue their recent hot play.

With less than 30 seconds to go in the period Ovechkin assured a tight third period by eluding the Leafs as he weaved from the left wing to the right before collecting a pass and swooping in to slot a backhand past Martin Gerber. All that did to serve was set the stage for a suddenly raucous ACC midweek crowd (I blame Daoust) to renew the fanbase's love affair with the formerly named Old Yeller.

A late ticky-tack penalty on the Capitals, fair play after the travesty that was the Capital's equaliser, led to the Leafs seemingly getting the game winner courtesy of a Pavel Kubina rocket from the point through an excellent screen. Of course, what is the Leafs' favourite thing in the world? Overtime! This time the Leafs' opponent actually needed the referees' help rather than the Buds' generosity. Normally, when a player puts his stick between a goalie's legs and pushes him and the puck into the net it's no goal (was it Brooks Laich? I think someone on TV mentioned that it might have been him). I think it might be a rule but it could just be tradition. Of course, that's only when it's not the Leafs. If they happen to look at a goalie that sucker is coming back.

Here's video, courtesy of Adam Gretz, of the incident that saw Gerber get sent to an early shower. Actually, it wasn't the physical contact with Mike "My Good Eye Is In My Pants" Leggo. He got the gate for following my advice and firing the puck at Leggo. Not surprisingly it was the other blind mouse that actually saw the shot.

Wilson said that they looked at the incident from a number of replays and weren't able to see the puck and I defy the homers from Japers' game thread to say that it was a good goal now that it's been counted. I want to say that I hope it happens to them but that would just be cutting off my nose to spite my face.

Anyway, I guess Mike "Glaucoma" Leggo should get a thank you for inadvertently providing Maple Leafs fans with one of the best memories of the season as Curtis Joseph was thrust into action. In those final 57 seconds of regulation as well as the five of overtime and the shootout I felt all previous hard feelings about the way that Joseph left for Detroit wash away.

We were all instantly flashed back to 1999 (why '99? why not) as Joseph stoned Alex Ovechkin on the only shot that he faced in regulation to ensure that the Leafs wouldn't be robbed just yet. Overtime saw him make eight more saves including a stunner on Green and a last one on Semin as the Leafs killed off a late penalty. After Jeff Hamilton slid his shot between Theodore's legs (and promptly led Pierre McGuire into ecstasy) CuJo stared down the Capitals in the shootout culminating with a stop on Alex Ovechkin. 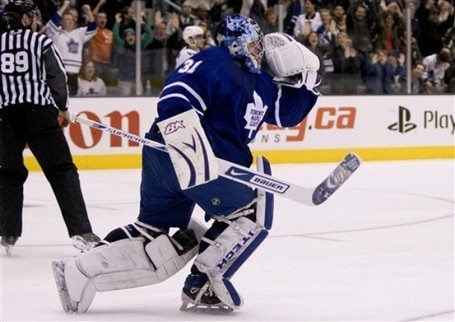 Aside from Joseph the big story was the midweek crowd at the ACC. They actually forced the broadcast to change camera angles with their enthusiasm. They were loud and helped push the team to hold on through overtime so I guess it can be done. It just takes a former star taking fans on one last trip down memory lane. It's just like Tony Danza's character in Angels in the Outfield but with a good sport. Once the Leafs return to respectability and the playoffs we'll see a lot more performances from the crowd like last night's.