NNN: Leafs Winning in March When It Matters

Share All sharing options for: NNN: Leafs Winning in March When It Matters 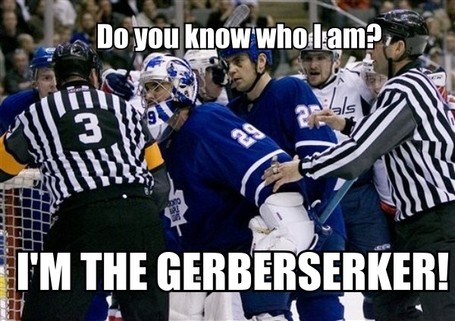 Damn right he is.

With a record of 10-4-1 in their last 15 games, the Leafs have gained 21 of a possible 30 points. To put that in perspective if the Leafs maintained that pace over the whole year they'd be third in the entire league. It would also be hard to argue right now that with some solid goaltending the first few months of the season this club would be heading to the postseason unless of course you asked Damien Cox:

Grampa, it hurt my privates.

As uninspired as the Capitals' effort appeared for the first two and a half periods, the reason they lost tonight was Joseph, who came on in relief of Martin Gerber after he was ejected for bumping linesman Pierre Champoux.

Somebody should really condition Gerber not to do things like that to Champoux. Martin needs to remain silky smooth to avoid getting washed out of this league. Hooray for CuJo though, eh? He's getting old but still has all of that lustrous hair and last night he showed that he didn't need to be unceremoniously put down.

Theodore also thought that he was bumped by Mikhail Grabovski on the Leafs' first goal and that an interference infraction should have been assessed.

Theo, talk to Brooks Laich about his goal and we'll call it a wash ok? Also, the reason Oreskovic didn't celebrate is because he scored on you and that's not terribly exciting. Last week I played ball hockey with my four year old nephew and let's just say I didn't exactly save the puck after I scored.

It would appear that Martin Gerber is a shrewd tactician who avoided a minor penalty for the team by shoving a ref. Martin Gerber risked a suspension to defend the honor of the blue and white. He's a true hero.

Before we all "don't stop believin'," we're going to have to start believin' again.

Seven games left to figure it out.

We're in your hockey games, demoralizing your fans.

He said he drew on the experience of having come in for Vesa Toskala – just for the shootout – in a loss to Anaheim earlier this season. "I learned from that," said Joseph. - Toronto Star

Contrary to popular belief, it would appear that an old dog can learn new tricks... sorry. Anyhow, reading The Star today I think we've finally reached the tipping point. I think The Star ran out of bad things to say about the Maple Leafs somehow. First Damien "Eat a Big Bowl of" Cox writes a pleasant article about how Phil Oreskovic gets outskated by bantams and now game recaps that don't include paragraphs about how whatever the Leafs did wasn't the worst of all possible outcomes. What's this world coming to?

The Star's smartest commenters, posting their very best from a WebTV box hooked up to a black and white portable television, correctly identified that winning games means the Leafs are ruining their draft pick. The Leafs are still going to end up with a pick between 5 and 7 before Burke works his draft day magic. However, I think the systems of Wilson and co. as well as Brian Burke's asset management are starting to pay off. The locker room's better, the players seem to be having a good time and are bonding as a team. This Leafs squad has some work to do but this is a good start for a rebuild. Keep winning Leafs and let's see what you've got.