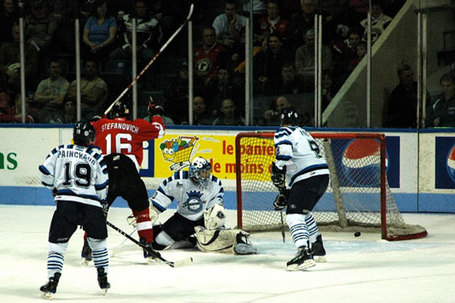 I won't lie, all season when the Leafs lost and people would bring it up my go to response was "they're improving that draft pick". When Vesa Toskala put up stats that would make woman hide their children (lest they skid through his five hole and into the net) I said "fine, Toskala's helping our draft pick".

However, seeing Stralman, Mitchell, Oreskovic, and Schenn playing in this late season surge has made me a changed man. The Leafs winning streak won't get them to ninth in the conference and it probably won't make them draft any lower than ninth overall. Looking down the standings there's no way that Atlanta makes up nine points on the Leafs in their eight remaining games which means the Leafs won't have a chance at a lottery spot. In terms of draft spot watching, we as Leafs fans should be rooting for Dallas, Los Angeles, Phoenix, and Ott... no forget that last one I can't say it.

If  the teams below us all win out and the Leafs stuff it Toronto might be sitting pretty with a sixth overall pick instead of an eighth or a ninth. Here's the ISS top ten right now:

We're not getting John Tavares but in the range the Leafs will be drafting in there's Evander Kane, big hitter Jared Cowen, slick scorer Nazem Kadri, and outside the top ten there's still Ryan Ellis and Jordan Schroeder. My point? It's a deep draft. Don't worry about the draft. (Remember, Burke can trade up too.) Speaking of Burke, his Ducks finished eighth from the bottom two seasons before they won the Cup. Have a little faith. Burke's got some tricks up his sleeve.

Most important in all of this is a look at this late season surge. As Leafs fans we've seen it in each of the past three years. First was J.S. Aubin and the team of destiny going on an absolute tear in the final weeks of the season to finish in ninth (ugh). There was something about those JFJ teams that didn't decide to play hockey until March.

The key difference between this season and the past three seasons is that underachieving veterans aren't around this year. Burke has shipped them out of town. Burke and Fletcher have actively cleaned up the locker room, bringing in guys like CuJo, Mayers, and Brad May to show the younger guys how the game is supposed to be played. They're hard workers who don't back down from everything but they play the game right.

Those guys are showing this team what it needs to learn. There are no more  vets in the locker room perpetuating their comfortable culture of losing. This is a young team that's buying what Ron Wilson is selling. In my eyes, this recent winning streak is the result of good coaching and it's going to benefit the young kids we have. This streak also says that Ron Wilson can do a good job in the locker room, focusing guys previously called "locker room cancers" like Grabovski and Blake. Looking at the best team in a salary capped league, the New England Patriots, one of the reasons they're so good is because of their locker room.

Not just the stars like Brady but the New England locker room is not a "me first" culture. The whole room knows it's a team and plays like a team. That allows the Patriots to bring in bad apples with high upside, like Randy Moss, cheaply and compete in a capped league.

The Leafs don't have any Terrell Owens-esque bad apples but coming up through the system they have guys like Mikhail Stefanovich who was widely regarded at a top 10 draft pick but fell to the fourth round because of his attitude and work ethic. With the right coach and the right locker room guys like that can fix their bad habits and seem like a draft day steal when they start producing.

There's a lot to be hopeful for Leafs fans. Rome wasn't built in a day but with the Leafs focused on player development both on and off the ice I think there's a lot to look forward to.