Editor's Note: 1967ers Leaf of the Day ties in nicely (of course) with Chemmy's post on the upcoming draft. Here's a cautionary tale about using your first round pick on a defenceman with a knee injury. 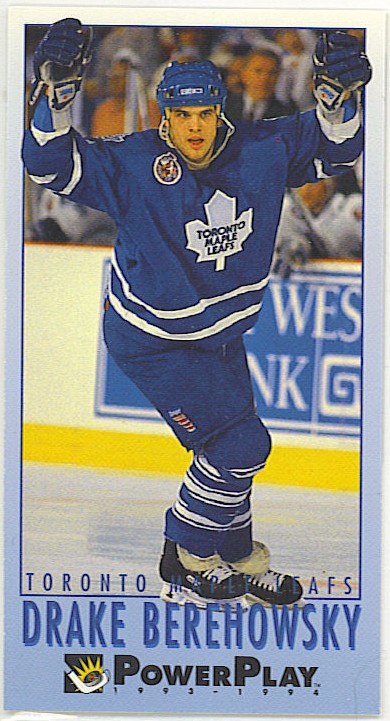 Barring a 1-in-50000 longshot coming through, the next big thing in the Leaf schedule is the draft.  They're currently in a position to draft 9th, but could reasonably wind up as high as 7th, given they're only a point up on Ottawa and Dallas and both have games in hand.  The guy currently at 7th in the ISS rankings is Jared Cowen, out for the balance of the season with a pretty serious knee injury.

He's an interesting pick.  Some rankings had him as high as #3, but this injury will likely make him available near where the Leafs are picking.

Personally, I wouldn't go for it.  While Bobby Orr had, oh, a wee bit of success on a bad pin, there are a lot more who didn't.  Kluzak, anyone?  Cowen has never rehabbed an injury before and will not have played a single game on that leg prior to the draft.  In a year as deep as this is reputed to be, I'd look somewhere else.

The best Leaf example of a player taken later than he might have been due to injury was Drake Berehowsky.  Same basic idea as Cowan.  He was rated pretty high until his took a major knee injury in his draft year.  The Leafs took a flyer on him at #10, despite the fact he only played 9 games that season.

The Leafs hoped that Berehowsky would prove to be a steal and as a junior at least, Berehowsky returned to form.  He was the CHL defender of the year in 1992.  At the NHL level, though, it never really happened.  There were more injuries and he never became that top-pairing guy.  His best success really came after he reinvented himself as a more defensive player and carved out a niche as a 5-6 depth guy on weakish teams.

Now, the 1990 draft wasn't the world's deepest.  There were a couple of sleepers in late rounds, particularly Russians and somehow Martin Brodeur survived until #21.  Perhaps Drake just panned out like much of the rest of that draft year did.  Still, though - if you've got a decent pick in a deep draft, why on earth would you spend it on a kid who just took a major injury?

The HHOF take on Drake:

Several years after entering the NHL, defenceman Drake Berehowsky came of age as a full-time player. A junior phenom with questionable knees, he was a part-time player for several years before finding his niche with the Edmonton Oilers and the expansion Nashville Predators. Over the years his strength has been moving the puck up ice and working the power play.

Berehowsky starred in Junior B with the Barrie Colts before joining the OHL's Kingston Raiders in 1988-89. He showed superior potential but was felled by a serious knee injury in 1989-90 which made a few pro scouts skeptical of his future. The Toronto Maple Leafs remained undeterred and chose the youngster 10th overall at the 1990 Entry Draft.

The rookie was given a look at the start of the 1990-91 season but was quickly returned to junior. He was a force for two seasons on the North Bay Centennials blueline and was named a First-Team All-Star and the CHL Defenceman-of-the-Year in 1992. After scoring 27 points in 28 games for the AHL's St. John's Maple Leafs, Berehowsky was recalled midway through the 1992-93 season. He fit in well as a puck carrying defenceman on Pat Burns' improved defensive squad and scored 19 points in 41 games. His mobility would have been useful in the 1993 playoffs, but he was hurt late in the season.

Since Toronto was fairly deep on the blueline, Berehowsky saw less playing time in 1993-94 and at the start of the next season. In April 1995 Toronto shipped him to the Pittsburgh Penguins for stay-at-home defenceman Grant Jennings. He toiled briefly in the minors until joining the young Edmonton Oilers in 1997-98.

Berehowsky played a more controlled and confident game for the Oilers while supplying an element of grit as well. He was given even greater responsibility after he was claimed by the expansion Nashville Predators in 1998. Berehowsky worked the power-play and helped guide the club's transition game. In 1999-2000 he set career highs with 12 goals and 32 points. His improvement made him a sought after commodity at the 2001 trading deadline. The Predators dealt him to the Vancouver Canucks where he spent the early part of the 2001-02 season before joining the Phoenix Coyotes midway through the season.

After parts of two seasons with the Coyotes, Berehowsky signed with the Pittsburgh Penguins in the summer of 2003, his second stint with the club. Upon his arrival with the club, Berehowsky went on to register 21 points (5-16-21) in 47 games before being acquired by the Toronto Maple Leafs in the second half of the season for blueliner Ric Jackman. 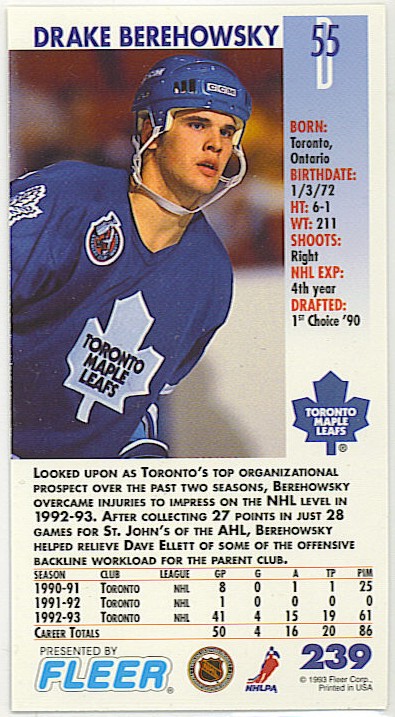