Opposing Coverage: Die by the Blade 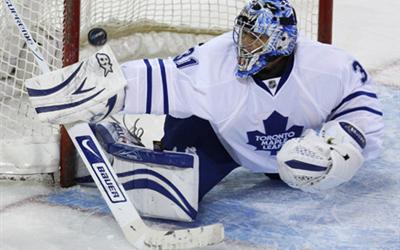 So this is a victory lap
Then I'm leaving

It would have been nice to see the old dog go out on a high note after that Capitals game but there's still work to do and CuJo's going to be the guy to do it. The Sabres get Ryan Miller back tonight which tips the goaltending balance in their favor as if they needed it. I'm still sort of hoping someone runs into my office and says "Oglethorpe's not playing tonight, he's suspended" except replacing Ogie's name with Miller's and "suspended" with "arrested for having sex with livestock". Can't win 'em all I guess.

The Leafs on the other hand do in fact have to "win 'em all" to quote who wrote the first page of this blog post. According to Mirtle's Manly Metric the Leafs are cooked, spent, washed up, over the hill, flabbergasted and hoodwinked, yet the Leafs aren't mathematically eliminated yet, so in theory this could be a four point game for a Leafs team that wants to take a shot at the postseason.

In the last two matchups fantastic and talented goaltending prospect Justin Pogge played very well but the Leafs barely lost by a smidge:

Oh, like Pogge I must have missed a few key moments of those games. Also, not to fear, the January 1st game also had our backup goaltender in net, Curtis Joseph, but tonight our starting goaltender, Curtis Joseph, will be in net making things completely different.

Going back to last year the Leafs actually beat the Sabres:

Hip hip hooray! Or not since Vesa Toskala was in net that last and is now out for the season having hip surgery. On the injury front, Niklas Hagman is expected to return for tomorrow night's game against the Boston Bruins. Frogren and Van Ryn remain out.

With any luck the Cujo from OT against Washington shows up. I'm rooting for CuJo for all the times he carried Quinn's defensively slipshod teams into the playoffs by letting the Leafs play run and gun hockey. I'm rooting for a classy vet to go out with something to be proud of and I'm rooting for a Leafs win because Dominic Moore is a punk.