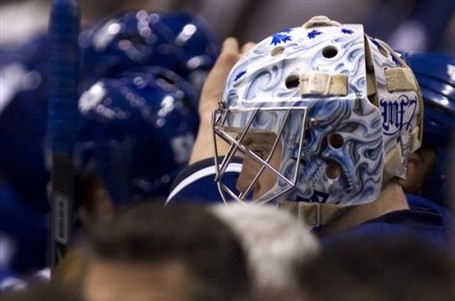 Justin Pogge kept that helmet on for a while once he got to the bench. You can see from this angle the 1000 mile stare he's got as he wonders what went so wrong in front of the home crowd again. There will be no shortage of talk about how Pogge is the worst goalie ever and not going to make the NHL. Considering his statistics:

The two appearances back-to-back can give a bit of a better perspective. Friday night he went into the game when the Leafs' were down 4-0 and there was no pressure. He stopped 14 of 15 shots and the Leafs' played a good game defensively. Last night he starts the game at home on a Saturday night and you could see the tension. His puck handling was terrible even though it's normally a strong part of his game. Unfortunately, his teammates didn't help out with their play.

The verdict: It's the little things that are killing Pogge. Once Gerber returns from his league mandated vacation he'll head down to the Marlies to hopefully lead them into the playoffs. I liked his post-game attitude. He acknowledged where he had gone wrong and you can't improve weak spots without realizing that they need work.

Now, there was some good news from last night's game with regard to the Leafs' future. The Mob (Kulemin-Grabbovski-Ponikarovsky) absolutely torched Chara. You can see the shift charts here at the wonderful Time On Ice. The line put up three goals and four assists between them while taking on one of the league's best defenders. Grabovski, especially, used his speed to harrass the Bruins' defence and made a really nice play on Poni's second.

Jay Harrison returned from Switzerland with more confidence. He looked good in particular on one shift in the third when he twice read the play perfectly and intercepted passes to keep the Bruins' pinned in their zone. Hopefully he'll add some more competition to the blueline going forward. Jay's definitely a Brian Burke kind of defenceman. And finally, Niklas Hagman returned only 6 games after Brendan Witt's suspension ended. Hagman was right back in form and potted his 20th of the year.

So the Leafs are off until April 1st when they play the Flyers. I wonder if Hagman should put on a bigger helmet...