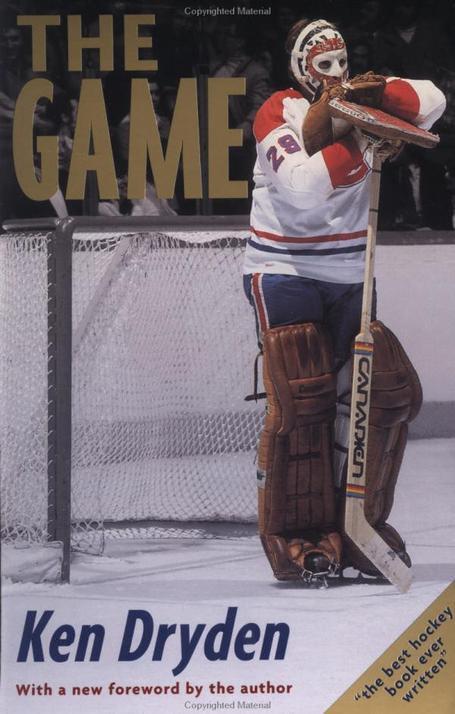 I am the prototypical bookworm. I'll read anything and everything I can get my hands on wherever I am. I love paperbacks because I can fit them in my jacket pocket where they are ready to save me from boredom. I'll likely meander my way through the Recommended Books List over the next couple of years picking up topics, series, authors, and exploring the themes and worlds that they touch on and create. However, I do not know that I will find one as well written as The Game by Ken Dryden.

Everything that made him difficult to follow as President of the Leafs and made him a failure as a Liberal leadership candidate - his meandering speech, his tangential approach to the topic at hand, his aloof nature- come through in his writing and combine to make this book possibly the greatest sports book ever written. At a minimum, it is, as MF37 noted, the greatest book ever written about hockey. Dryden provides the reader with an incredible view of the 1979 Montreal Canadiens, the relationships, and insights into the dressing room. However, he does not stop at recounting the relationships between the players. Dryden provides insights into the players' history that reveals the development of their personalities. It's really an extraordinary book and is worth reading if only for the passage at the end when Dryden examines the history of the game and how certain developments have dictated the way it has evolved. It shows a breadth of understanding of the sport that one suspects you might never be able to achieve.

I guess what I am trying to say is that you should run out and read it. What does it have to do with the trade deadline?

Fans (obviously) and analysts (no kidding) can sometimes lose sight of the forest for the trees. Building a team is much more than uniting the best or most expensive players as any Rangers' fan can attest. As much as we would like for trades to be straightforward (Kaberle helps Boston now and the draft picks and prospects help the Leafs when they get good again) the reality is that general managers have to look at a number of intangibles in addition to their usual observations.

Here is Dryden talking about trades and their effects on the team:

You should always know what you're giving up; you can never be sure what you're getting - it is the general manager's dictum. But a trade involves change, and the effect of change can never be easily predicted. Each team, each player on a team, is a web of dependencies, personal and professional, positive and negative, many of which can only be guessed at beforehand; the small player who needs the protective confidence he gets from a big player, the big player who needs a small player's quickness to open up the ice; the younger player who needs an older player as a model, the older player who needs a young player to excite him and motivate him through his late-career ennui; the teammate who translates a difficult player to the rest of the team, the secondary star who leads only where there's a pre-eminent star to follow, the older player who blocks the development of a younger player, the player who makes a team enjoy being a team. A trade disturbs these relationships, many of which the team intends to disturb by making the trade, and in doing so, the personality, character, and chemistry of a team will be affected, both on and off the ice. Just how a trade changes things often takes some time to emerge - Phil Esposito in Chicago, Boston, and New York was three different players - but two things are certain: If a team doesn't agree with a trade, it will feel let down, using the trade as a crutch whenever it needs it, often before: and even when anticipated, a trade is a wrenching personal experience for a team.

Whew! That's a hell of a paragraph. An English teacher might have a fit but a hockey fan has to look at that and see another lens through which to examine any potential trades. Along with the myriad of other factors the relationships on a team might be one more thing that conspires against the Leafs being able to make the kind of moves that we are hoping that Burke can pull off.