We Got Whomped On

Share All sharing options for: We Got Whomped On 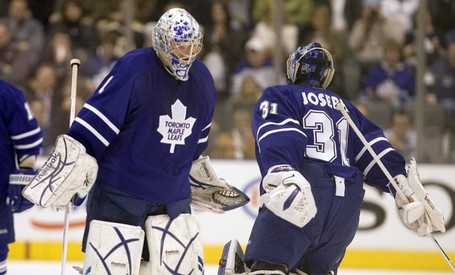 Wait, who's relieving who?

11 points out of eighth with six games to go, the Leafs aren't eliminated from the playoffs yet, weirdly enough. If Montreal, Buffalo and Florida lose out the season, and Ottawa loses a couple games (while beating Montreal in regulation in their head to head) Toronto only needs to go 6-0-0 against... Philly (2x), New Jersey, Buffalo, Montreal and Ottawa. Crud.

Toronto's attempt to play President's Trophy spoilers fell flat on its face Saturday night when Toronto blew multiple leads to the Bruins. At one point in the game it was 4-3 Leafs and I went into the kitchen to grab a beer and check on the oven. I came back out and it was 6-4 Boston. Great.

To observe Earth Hour, the Maple Leafs turned off their goaltending last night. - The Star

Well, that's fair I suppose. I wouldn't hang it all on Pogge though.

It was an embarrassing night for the Leafs, who played very loosely in their own end, and for rookie goaltender Justin Pogge, who was picked apart for six goals before getting the hook for Curtis Joseph less than 33 minutes in.

The Leafs defense seems to think that Justin Pogge is actually the best goaltender in the league and that when he plays they don't need to. Pogge's looked rough around the edges but he's a young kid - that's expected.

Some reporters are now calling Ponikarovsky "Mr. Saturday Night." His three-point effort came after two consecutive four-point Saturdays as he seems to have blossomed offensively since his friend Nik Antropov was dealt to the Rangers at the trade deadline. The 23 goals for Ponikarovsky is also a career high.

"Saturday nights are always exciting," he said. "Points are points but you just want to win the game."

Is anyone else imagining Ponikarovsky singing "Saturday Night's All Right For Fighting?" Sat-toooor-day, Sat-toor-daaay... Nevermind.

''We want both of our goalies to be in a position of strength,'' explained coach Claude Julien, noting that he'd like to use Fernandez again over the club's final eight regular-season games. ''That will allow Manny to find his game, and it will allow Timmy [Thomas] to get his rest.'' - Boston.com

Toronto would be in decent shape if over the course of the season either of its goalies were doing fairly average. Sigh.

IN the midst of a Steve Montador-Luke Schenn fight in the third period, TV cameras caught Leafs GM Brian Burke with a pair of binoculars trained on the combatants. The ex-Ducks GM appeared to have a slight smile on his face as he lowered the glasses.

Who wasn't smiling after that fight? Besides Steve Montador I mean. As pointed out by one of our commenters (too lazy to look you up, yell at me in the comments), the Leafs are the only team to hang five goals on the Bruins twice this year, and one of three clubs to hang five on the Bruins at all. Still think we need Tavares over more depth on the blue line and in net?

The Leafs' defensive end struggles are why the Bruins absolutely pounded them again, and at this point we have a chicken or the egg question: does our goaltending suck because of our defense, or does our defense look bad because of our goaltending? With some goal scorers rising through the ranks of the organization (Tlusty, Stefanovich, Stalberg, DiDomenico) I'm crossing my fingers for some stud d-men and a goaltending prospect in this draft and the next one.