Share All sharing options for: Vesa Toskala Ruins Everything 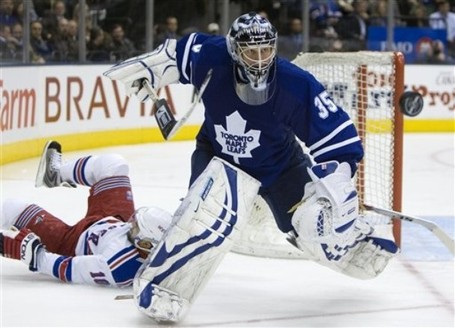 Pardon me boys, is that the Chattanooga choo choo?

Vesa Toskala, shown above doing the Charleston, is a ruiner. He ruins everything that's wholesome and good in this world. "But Chemmy," eyebleaf someone will say, "Toskala made 49 saves on 52 shots last night. That's a .942 SV%! Toskala is great!"

My response to that is "where was that jackass all year?" Toskala's crapulent play is what got us into this mess. Sure, the Leafs weren't supposed to be a great team this year, but I think most people were referring to the offense. Well the forwards are just fine, as evidenced by the rookie sensation that's sweeping the nation John Mitchell lighting the lamp twice on Martin "Fatso" Brodeur.

Point of order, I don't like the Fatso moniker for Brodeur but with Avery back in the league it's de rigeur. There's actually a ten dollar fine for not including one "fatso" reference in an article about Brodeur now.

The problem all year for the Leafs has been goaltending. Vesa Toskala's sub .880SV% helped keep the Leafs in the basement, and now that they're basically eliminated what does Toskala do? He decides to play hockey. Over his last six starts, Toskala has faced 233 shots (38 shots per game) and come out with a save percentage of .939. Toskala killed our playoff hopes, now he's killing our draft lottery hopes.

So I ask you, Leafs fans, Vesa Toskala: amazing goalie who found his form, or Sens double agent? Proof of his untimely saveliness below: