Toskala Done for the Year

Share All sharing options for: Toskala Done for the Year 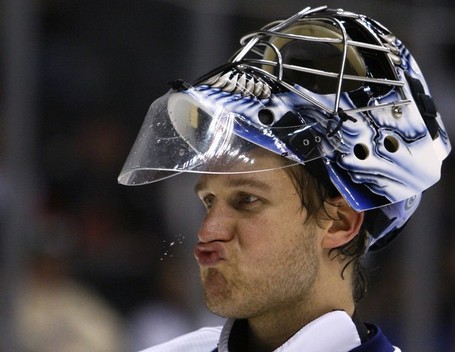 Your days of Charlestoning are over, buster.

Toskala said he would have hip and groin surgery next week, as the Leafs practised at Lakeshore Lions Arena without him.

Vesa Toskala is heading to the IR to have hip and groin surgery, which explains the Gerber move. I have to be a little curious though. Two weeks ago this story broke:

"Vesa is fine and the images showed no structural damage," Wilson said after the Leafs' noon practice at Lakeshore Lions Arena. "It takes a couple of days for the dye used in the MRI (exam) to be flushed out and we gave him the day off."

Since that story, Vesa Toskala has probably played his best six games as a Leaf, posting a .939SV% since February 18th. Toskala's 49 save effort last night boosted his save percentage by .002, which is a huge positive swing this late in the season.

So what's going on with Vesa? Is he actually hurt? Was the MRI two weeks ago not precautionary? Did the MRI show damage that was unannounced? None of those seem likely given Toskala's play. If he thought he was hurt one wouldn't expect Toskala to play his best hockey of the year. Was Toskala injured in last night's 49 save effort?

This is going to be something worth paying attention to in the coming weeks. There's a lot more to this story that isn't leaking out.