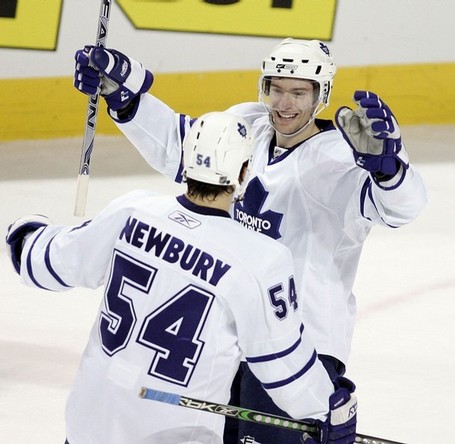 Tim Wharnsby is reporting from Leafs' practice that Dominic Moore is headed to Chicago. No word yet on what the return is. From The Globe and Mail:

Our man Wharnsby reports from Leafs practice that Dominic Moore is headed to Chicago.

12 goals in 63 games and Dominic Moore wants $3m a season? He should be glad Brian Burke didn't break his neck at the bargaining table.

Dominic Moore embodies everything wrong with how the Leafs were run. Players from Ontario should want to play in Toronto for less than they'd sign elsewhere. The Leafs shouldn't overpay players to have them remain in the blue and white. Three million? Dominic would be lucky to have a roster spot on a playoff team, that's why he gets waived so much.

Moore spoke publicly about wanting to take a hometown discount yet turned down a three year $5.1M deal. Does this guy think he's worth more than that? He honestly won't see more than 10 minutes of ice a game for a good team. The Leafs are rebuilding and that forces crummy players like Moore into larger roles where they can produce more by sheer virtue of not having anyone better around to do it. I'd be happy to get anything at all in return for Moore, let's hope Chicago sent something juicy. In closing, don't let the door hit you on the way out Dominic, I've always hated you.

Update: From the Globe and Mail:

Steve McAllister:  Leafs are now denying that Moore is going to the Blackhawks. We'll see.