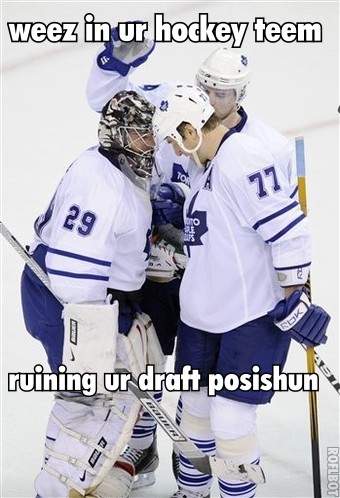 The Streak is over! It certainly didn't end in the way that we thought it would. There was no 8th straight overtime game for the Leafs so they'll have to share the record of 7 with the 2003-2004 Oilers. They did, however, manage to push their record to 6-1-3 in their last 10 games. These guys are unreal once it's completely unfeasible for them to make the playoffs. I think that Burke's next acquisition should be a mental coach or hypnotist that can convince the Leafs that they are basically eliminated from the playoffs at the beginning of training camp. Right now, despite Brian Burke's best efforts at telling the team through his actions that they should stop killing fans with their wins the Leafs continued their assault on 11th place.

Pavel Kubina has been one of the biggest culprits during this recent run. Apparently, according to Andy Frost, Pavel Kubina told Brian Burke that he wanted to be a Leaf and didn't want to go anywhere. Brian Burke told him what he told Antropov: You want to stay? Play better. So he did. As an aside, why not say that in November when you got here!? Anyway, over the past 16 games Kubina has potted 5 goals and 11 assists including the game-winner tonight.

The newest saboteur comes from our arch rivals, and by arch rivals I mean the little kid that won't stop trying to play with the big boys, the ottawa senators. This agent provocateur (more French? He's Swiss) had a decent time in Binghampton - well, as good as it could ever be in Binghampton - and better stats than every other goalie. But he was still the Gerbatross. Of course, that just means that he is laying for a new contract so we can expect more games with a .974 save percentage. Dear God, the senators learned how to tank in one season and four seasons on the only thing the Leafs have perfected is driving their fans insane.

Now, I understand that we want to discourage players crashing the net because they might injure a goalie but if the goalie doesn't want to get it then maybe they shouldn't come out to the top of the crease and crash into poor Jason Blake. Is it any surprise that one game after Marc Joannette and Greg Kimmerley perpetrated one of the most underrated crimes of the current century that Mitchell's goal was called off? I'm surprised Kubina's stood. Maybe draft picks aren't the only thing that Burke bought.

You know, this win streak is really a product of picking up points from bad teams (Isles, Sens, CBJ) and good teams that are on the skids (NYR, WSH).

But when you look ahead at the next six games, there’s a whole pile of crap teams coming the Leafs way:
Edmonton
Ottawa
Islanders
Tampa
Calgary
Tampa

Calgary is the only team of note…actually, this likely means the Leafs will lose five their next six.

The Leafs are still nine points out of eighth place and have to jump three teams to make the playoffs. You can see the team's odds of making it into the playoffs at Sports Club Stats. It's almost all the way from slim to none. From here on in, any team that loses to the Leafs might as well give up because they seem to have hit their unbeatable stage of the season. Well, the senators and Islanders should just give up regardless.

As a final note, how about a thank you to Lee Stempniak. After games and games of wanting him to do something he pots the goal that starts off the win. God forbid he do that weeks ago. Thanks a lot buddy!