Share All sharing options for: Ninth Place Here We Come 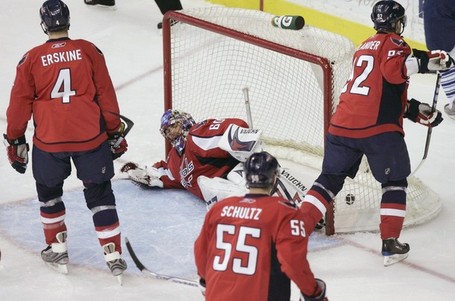 For the first time under Bruce Boudreau the Capitals have now lost three straight games at home, but the coach was more pleased with his team's effort tonight than the first two games during this streak. - Washington Post

Your team just lost to the Marlies, and nearly got shut out by a goaltender who got yanked after six minutes in an AHL game this week. How could you possibly be pleased with that effort?

It was just the sixth time this season that Toronto has held an opponent to a single goal. They have not recorded a shut out this year.

Maybe Vesa Toskala got his shut out playing ball hockey. Maybe "SO" in the stats for goaltenders doesn't stand for "shutout". Maybe people who actually get paid to write about hockey phone it in worse than I do, I dunno.

You may have wondered why Boudreau pulled Jose Theodore, who declined to comment after the game, with about two minutes remaining in regulation. It's because Michal Neuvirth is a very fast skater, while Theodore is not, and the rookie can get to the bench much quicker when they're trying to pull the goaltender.

How slow is Jose Theodore? Is there really a huge difference in time between two goalies sprinting 40 feet? The Caps are at home so Theodore should have the short change... what the hell?

I normally don't post comments from articles on the web but:

I really wasnt all that impressed with Gerber, alot of it was due to the Leafs defensive style, which is to trap like hell. Alot of those saves were on shots that were flat on the ice, any rec league goalie should be able to make those kind of saves. Flash and Steckel need to lift the puck. Posted by: cc415

"I'm very disappointed we didn't take this to overtime and set the record," Wilson deadpanned. "But we tried at the end." - The Star

If you don't like Ron Wilson I hate you. End of story.

Gerber said he was looking at these last few weeks in the Toronto net as a second chance. Last night, he made a pretty good first impression with Leaf fans in attendance chanting his name.

Wilson rolled out several new line combinations with the departure of Antropov and Moore and the arrival of Ondrus and Hamilton. Stempniak played with centre Matt Stajan and winger Alexei Ponikarovsky, who both picked up assists on his goal at 6:05 of the third.

I thought Stempniak was buried a little bit on the Leafs, hopefully this is his chance to shine. For the rest of the day though, I'm going to be happy that the Leafs successfully "trapped" the Capitals. DE-FENSE!