Oilers at Leafs: Will There Be Kevin Lowe Quotes?

Share All sharing options for: Oilers at Leafs: Will There Be Kevin Lowe Quotes? 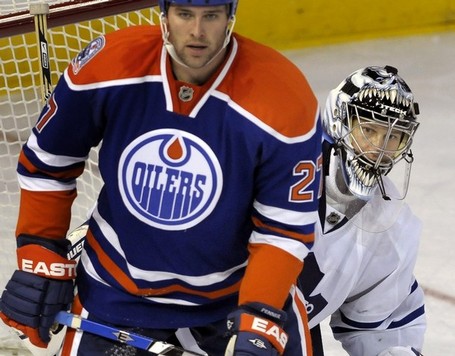 Sneaky Toskala could be behind you right now.

I'm asking a serious question: will the Maple Leafs ever lose a game again? They haven't lost since February 17th, a game in Buffalo where Justin Pogge got shelled. Since then we've seen Toskala become good and hit the IR, we've seen Hagman get another concussion, Jeff Finger go down in a pool of his own blood at the Verizon Center, Nik Antropov and Dominic Moore get traded, and Martin Gerber arrived to stop 39 out of 40 pucks.

Our injury list is now somewhat comical, I'll skip the IR and recent injured acquisitions to point out that Hagman remains out, Kaberle's out, and Finger will return with a visor.

Maple Leafs defenceman Jeff Finger figures his season came within a centimetre of ending on the ice against Washington on Thursday. But Finger got lucky. If a cut for 21 stitches over your eye can be considered lucky.

The NHL's stellar injury reporting standards have apparently dictated that Ethan Moreau getting his eye gouged out is an "other-excused" injury. The good news is apparently his eye is intact and he'll make a recovery.

In the previous matchup the Leafs trounced the Oilers 5-2:

The Oilers sit in 9th place in the West currently with 68 points, but they have a game in hand on the three teams tied for sixth with 70 points. Hopefully the Leafs gutting works and the Oilers playoff desperation gets this ship headed back towards the bottom of the seas, where John Tavares lives.