Share All sharing options for: Battle of Ontario V: Redemption

(SSS? What a lame acronym) 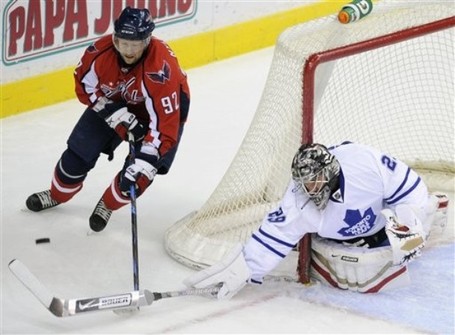 What's the old saying? You can never go home again? Martin Gerber gets to take a shot at it tonight. After being cast aside by Ottawa in favor of Alex Auld and Brian "Oops" Elliott, Martin Gerber would probably love nothing more than to continue his chances at having an NHL career next season by stuffing the Sens.

This game also shows off the growing power of LeafsTV, who are now showing Leafs-Sens on their network and not just Leafs-Thrashers or Leafs-Islanders. Hope you've all got digital cable (sorry Jared) or feel like hitting the bars tonight.

Toronto has 2 dates with Ottawa left, and 2 with Montreal. If they can win those four and lose every other game, that would be just peachy. Here's the previous matchups this season:

The Leafs are 3-0-1 against the Sens, which is just the way I likes it. The Leafs are adding Anton Stralman to replace injuries on their blueline and playing in his first NHL game will be Phil Oreskovic. Ottawa's injuries currently are:

Without Neil and Bass, it's astounding to think that the Sens haven't already forfeited. Hopefully this is as exciting as the last few Leafs-Sens games, go Leafs go!