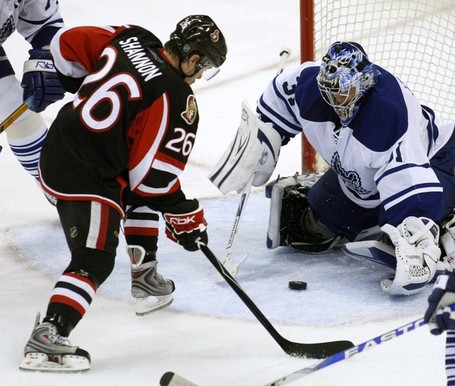 The 2-1 loss to the senators is the kind that I think most Leaf fans can live with this season (and maybe next year's as well). The Leafs outplayed the senators for the majority of the game, another rookie got some experience, and a team below them in the standings unwittingly moved towards them. The "Stanley Cup Contender" ottawa senators were frequently pinned in their own zone by the Leafs' speed and tenacity and only managed to get two flukey shots past the 41 year old Martin Gerber. Bruce "Malkin to the Kings" Garrioch might want to thank Ron Wilson for starting Joseph because now he gets to write about the PLAYOFFS!!!1 since Gerber would have likely shut out the senators.

The highlight of the game wasn't that Alfredsson received deafening boos or that the senators' defence couldn't hang with the Leafs' mix of kids and AHLers but Martin Gerber giving Ronnie Wilson some insider information:

When Giggles realized that the jig was up on the illegal stick he tried to break it by stepping on the blade before going to the bench to try to switch it up but the referee was too quick (shocking) for him. What do senators fans think? Keep in mind all of the whining they have done throughout their history about everything from government support to the refs not calling enough penalties on the Leafs during the playoffs. Apparently they condone cheating:

Who the hell calls someone on an illegal stick challenge? I'm not going to criticize Ron Wilson for doing so on Spezza too much, I guess, because he was right and it gave his team a chance to tie the game late, but really. Come on. A game between two teams that has absolutely no bearing on any playoff race? Whatever, man, if it helps you sleep at night. I think, for the record, the penalty was because the minimum stick-blade width is 2", and Spezza's looked pretty thin near the tip.

Of course, this is the same fanbase that defends a hit from behind and holds it up as proof that their captain isn't a gutless puke. Oh yeah, and they worship at the altar of Chris "No thanks, I'll pass" Neil. I bet they think that Dany Heatley was unfortunate to have to do any community service.

Unfortunately, despite pulling Curtis Joseph the Leafs were unable to capitalise on the 6-on-4 so the senators pushed the Leafs' record in the last 10 to 7-2-1. They also cut down the gap in the standings to three points with only one game in hand. Stupid sens.

The Leafs are back in action against another Tavares Cup challenger as they host the New York Islanders. Tune in tomorrow night. Same tanking team, same tanking channel.