Ed.'s Note: This is the third year of having to run this post. Some day soon I hope I'll just be able to cheer on the Leafs and pretend that hockey stops when they get eliminated (or you know, when they win the Cup). Some of this is new, some is old, all of it is true.

If I were to say that the NHL playoffs were about one thing it would be the Stanley Cup. Pretty obvious right? But if I added a second thing what would it be? Personal sacrifice? Emotions run wild? Players leaving a legacy? Delirium-inducing highs and depression-triggering lows? Sure. It could be all of those things but the right answer is hate.

Two years ago Neate Sager penned a guide to the playoffs that focused on hatred. Andy Grabia seethed at the thought of bandwagon fans in Edmonton supporting Calgary of all people. He even suggested a Sporting Inquisition although he didn't think that a death penalty was necessary (personally, I would not want to tie the tribunals hands) he did want to root out sports greatest evil: Bigamy.

Now, there is some irony in that I, along with others, have decided to start supporting the Capitals (vote for yourselves below). The difference lies in that we just want a little something to cheer for during another playoff-less spring and there is no way that we'll switch allegiance permanently. Is that having your cake and eating it too? Maybe but if you tell me otherwise you're wrong.

The reason that the Capitals are an acceptable proxy for the Leafs lies in the rationality of playoff hate. Personally, aside from the Leafs I make all of my picks based on hate and even then you could probably say that cheering for the Leafs is a kind of self-hate. 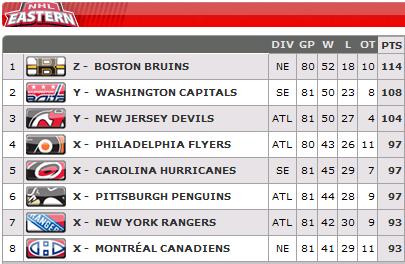 The order of evilness this year amongst the 16 teams is pretty simple:

There is no cheering for other teams especially rivals. Much like Andy I have had people ask me if I will be cheering for the Flames or Canadiens or senators because they are Canadian teams. That entire concept is ridiculous. Hell, a national bank tried to bamboozle residents of Toronto into supporting the senators during the scum's run to embarrassment in the Stanley Cup Final! Dilletantes that make that suggestion show that they have no grasp whatsoever of what it means to be a fan(atic). That season the most Canadian team in the playoffs was the Ducks but no one in the country advocated jumping on their bandwagon.

Over at The Battle of Ontario I penned a series of posts titled "Playoff Memories" that basically served to highlight all of the senators' painful playoff losses in their club's history. A commenter accused me of writing the posts out of bitterness. I added that it was mostly hatred for the sens. That is what makes sports so wonderful. While cheering for your team is the majority of your fandom (take note sens fans: majority) an accompanying element is the schadenfreude of seeing your rivals fail. Come playoff time sometimes that is all you have left (see: Nation, Leafs) but at least it helps you figure out who to support.

Now, not everyone hates the same way so outline how you choose who to cheer against during the playoffs. Chemmy lives in New York City so maybe it's the stink of the city that seals the deal. Or the fans spitting on him at Flyers games. Or Bobby Clarke. Basically, what I am saying is that everyone hates differently. How do you hate?

Note: Since I have more experience at running polls where I want a particular outcome I won't run into the same problem as Chemmy. Enjoy supporting St. Louis!