Oh When BU Goes Marching In

Share All sharing options for: Oh When BU Goes Marching In 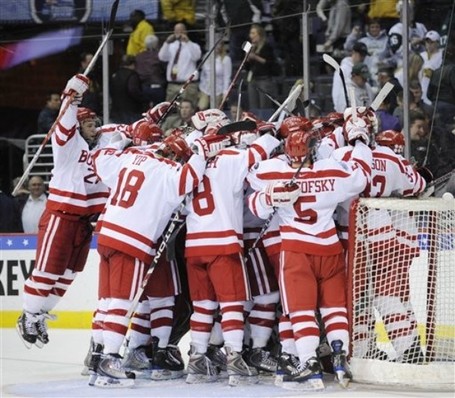 Oh how I want to be in their number, when BU goes marching in.

Wow. Someday soon I hope we get to share a moment like this as Leafs fans, but for now we'll have to do it as Terrier fans. BU's 5-4 thriller last night sends them to the National Championship for the first time in over a decade, where they'll seek their fifth national title.

BU opened the scoring when Colin Wilson  no look deflected a Shattenkirk shot into the net, and opened their lead to 2-0 when Colin Wilson stole the puck at UVM's blue line which was picked up by Jason Lawrence who pulled a give and go with Chris Higgins and absolutely undressed Rob Madore.

BU came out flatter than Ottawa in game seven for the second period, where Vermont scored on a weak unscreened wrister from the top of the circle, then tied it up with a power play tally, and then scored another unscreened softie to make it 3-2 Vermont.

Vermont had seven power plays on the night to BU's three, and I hate to say it but the calls on BU were marginal at best and really helped Vermont stay in the game. As soon as Vermont made it 3-2 BU snapped out of their funk and returned to dominating UVM in both ends of the ice as much as possible given that every time BU threw a hit they went to the box. With a minute and a half left in the second BU capitalized on the power play, scoring a very un-BU hard work goal in front of the net.

In college hockey the roster is different year to year, but one constant at BU has always been Jack Parker, the man, the myth, the legend. I sat through ESPN's tedious coverage of a baseball player's death (not that I take the tragedy lightly, but when ESPN insists on bringing it up every 30 seconds it starts to feel like they enjoy the ratings bump when something terrible happens) hoping that Parker would settle the team down during the second intermission and they could come out and win a one period game.

Gary Thorne and Barry "Couldn't Win Shit With Gretzky On His Team" Melrose made the following moronic statement: "the longer this game is tied, the better UVM's chances". Yes, the longer the game is tied, the worse it is for the offensive juggernaut. BU has way more weapons than UVM, meaning that at any point it's probably more likely that BU would score, meaning that in a tie game if only one more goal happened you'd be a moron to think UVM had the better chance of scoring it.

Perhaps Thorne and Melrose were in on the attempted screwjob, because shortly thereafter UVM got another phantom power play and capitalized, making it 4-3 UVM with just over ten minutes remaining. Four minutes later BU got a hilarious lucky break as a Chris Higgins centering pass was swept into the net by a diving UVM defender and the momentum swing was complete. From that minute on BU smelled blood and attacked.

A minute after tying it up Colin Wilson won a faceoff to Chris Higgins who fired a shot low on Madore. Madore butterflied and kicked the puck directly onto Colin Wilson's stick where it was promptly deposited into the back of the net. 5-4 BU with 5:31 to go. UVM would pull their goalie with a minute and a half left, and it wouldn't matter.

BU played five minutes of beautiful puck possession, with Trivino at one point holding the puck on his stick in the corner of the ice in UVM's end for almost a full minute as I sat on the couch trying to breathe as the clock slowly died. UVM gained the zone with thirty seconds left but BU gained possession and cleared, missing the empty net by six inches. After Wilson's goal UVM didn't get a shot on net.

Saturday night at 7pm I hope to see my other favorite hockey team win the biggest prize they can, hopefully someday we'll get this chance with the Leafs. Until then, go Terriers!