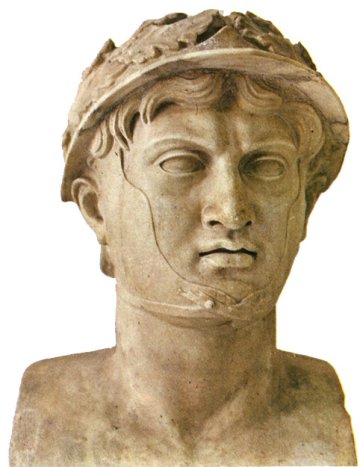 Pyrrhus of Epirus
"One more such victory and we are lost."

In the papers tomorrow and likely in the build up to the draft there will be a lot of hand wringing amongst fans and reporters about the Leafs' 5-2 victory over the senators. Despite it being a long shot considering their opposition the Coyotes and Kings did exactly what needed to be done. All that was left was for the senators, presumably hoping to end their season on a high note and turn back the regular season tide in the 'Battle of Ontario', to win in Toronto. Instead, the Leafs, led by Boyd Devereaux and the GRBRZRKR, pushed the Leafs' record to 8-2-1 in their last 11 meetings with their provincial baby-siblings.

In 279 BC Pyrrhus of Epirus gave us the term "pyrrhic victory" when he went toe-to-toe with the might of Rome. If you see it mentioned in the next while it will likely be used to suggest that the Leafs have someone screwed up by winning too many games and particularly last night's. That is certainly not a belief held by Brian Burke or Ron Wilson:

Bkblades summarises the argument against losing on purpose well:

I do get quite annoyed with all this talk about the Leafs messing up by not "tanking" or losing out. And it’s not just you or anyone who commented here per se, so if it seems like I’m singling people out, that’s not my intention and I apologize. In any case, the Leafs as constructed from the start of the season were not bad enough to be drafting in the top three. Burke’s acumen should be based on what he can do with what’s given. If Burke can’t provide a solid foundation for a successful club without the use of really high picks, what good is he from any other GM that wins the magical draft lottery? GMs like Doug Wilson, Lou Lamariello, and Ken Holland all have done quite well with relatively low draft picks because they knew how to scout (or at least hired the right scouts), make creative deals, and smartly use free agency.

The draft is not some magic pill that will cure all the problems of the Leafs and the rebuild is suddenly all for naught because the team failed to secure a top five pick or whatever arbitrary number someone decides to choose. The difference from drafting third to 10th isn’t that big of a deal if you operate the team properly. Atlanta is a prime example of high draft picks that have gone nowhere because all their subsequent draft picks after the first round have been close to worthless.

One of the themes for this season has been re-establishing accountability. Players like McCabe, Colaiacovo, and Steen were shipped out because they were part of what Ron Wilson referred to as the culture of entitlement in the Leafs' dressing room. Early in the season, when the debate about whether to keep Luke Schenn in the NHL was raging, Wilson emphasised that his systems only work if he maintains integrity in his message. Luke Schenn was one of the team's best defenders so he stayed with the club. Ian White, Jason Blake, and Matt Stajan weren't ready at the start of the season and he delivered well-received messages that put their seasons on track.

If anyone expected Wilson and Burke to set this team up to lose then they weren't paying attention this year. Part of what they are trying to instill is a never-say-die mindset. Some nights this season the players didn't carry that out but to suggest that they not do it on purpose is ludicrous. It impugns the integrity of everyone associated with the club. What kind of message does it send the team if they are told to lose when it's convenient?

"Umm guys, it would be great if you lost this game just in case the Coyotes win later tonight"

How soon after that is suggested by the team's management do you think that they'd lose the room? Vince Lombardi probably said it best "Show me a good loser and I'll show you a loser." The players' job is to play to the best of their ability and the coach's job is to manage those abilities to ensure the greatest possibility of victory. Brian Burke's job is to create a Stanley Cup winner with the tools available to him. If the players and coaches do too good of a job and don't deliver five straight first overall picks then too fucking bad. Far more important to his success will be developing a leading scouting and player development system, improving the team physically (Wilson noted that they were in the worst shape of any team that he had ever been associated with and it makes me wonder how Keith Acton still has a job), and finding the players to fill the gaps that he identifies.

Before the season started there was a segment of Leaf fans that wanted nothing more than to see the Leafs lose 82 games on purpose in order to get John Tavares as if he was a tonic for all that ailed the Leafs. Let me offer this strawman an alternative:

Rather than have John Tavares play with a bunch of worthless losers the Leafs can now have someone like Jared Cowen (previous ISS rank: 3) plus the players that Wilson identified as having developed into parts of the future - Schenn, Grabovski, Kulemin, and Mitchell - with a year of experience and growth under their belt. This season has allowed Burke and Wilson to identify those pieces, evaluate them and determine how to help them improve. I'd much rather they have gone through that process than to have dismantled to the team to ensure their ability to draft one player.

So enjoy one more beating of the ottawa senators and scroll through the gallery of images from the season finale.