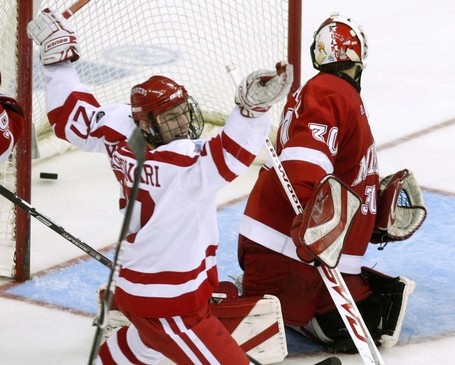 Colby Cohen shoots... blocked by Roeder... it's in the net! Boston University has won their fifth NCAA division one title! The best team in college hockey all year didn't disappoint and skated to the championship.

If you didn't want Saturday night's game and read that paragraph, you might think that this was a boring game whose conclusion was set weeks ago. You would be wrong.

Things happened in the first two periods of this game but they don't matter at all. BU took a lot of penalties but kept Miami off the board on the PK. BU's PK was seven for seven on Saturday night. Perhaps it was because BU was on the kill so long but their offense looked flat for 2.5 periods, and at the end of the second the game was tied at one.

With three and a half minutes left, BU's genius coach Jack Parker waited for the end of a TV timeout and then called his timeout after both teams were at the far end of the ice for a faceoff. He had goaltender Kieran Millan skate halfway to the net at the end of the timeout before having him come back to the bench for an extra skater.

The Miami crowd was going crazy. "Non-partisan" fans were cheering at the looming upset of heavyweight BU. Signs that read "Miami national champs? Yes we can!" were shown on the jumbotron alongside signs such as "Upset in DC".

Miami had a two goal lead, and three and a half minutes to shoot at an empty net. BU won the draw but couldn't get a good pass across the slot for an open net one timer. Miami cleared, BU chased the puck down and set up again. Miami cleared, BU again regained the puck and dumped it in low. Brandon Yip worked the puck behind the net to Nick Bonino who took a shot on net that was stopped, but the rebound came out to Zack Cohen who shovelled the puck through the armpit of Miami's goalie to make it a 3-2 game with 1:00 left on the clock.

Paraphrasing Two Line Pass, he said something that was absolutely true this year, at times BU would decide that it was time to win a game. They'd hit the switch and that was it, game over, BU wins. Echoing other college hockey fans, I'd like to see what would happen if BU played sixty minutes of hockey at their potential. This year, at least, they never had to. It looked like that was going to work against them finally.

Standing in the back of the Verizon Center, we watched the clock tick down and BU move the puck around the zone. Forty seconds, at least BU made this a game again. Thirty seconds, Miami played incredibly well, congratulations to them. Twenty seconds, I bet those Redhawks fans - GILROY TO BONINO THIS GAME IS TIED!

The Terriers survived a scare with five seconds left on the clock to go to OT, but I think everyone in the building knew the final score the second Bonino blew a puck under a d-man and over Reichard's leg. BU absolutely dominated play in OT. They hit a post on the first shift and never let up. It took ten minutes but finally Colby Cohen took a slapshot, a Miami defenseman dropped to block it and it hit him, popped straight up in the air, and fell into the net. Reichard didn't know it was a goal until well after the crowd had gone insane.

In a way the OT goal was anti-climactic, but maybe we had expended all of our joy and tears in the third period. As a fan, I can't believe what I saw Saturday night. I watched BU set up and complete an incredible comeback and I'll be lucky if I ever see a finish to a game half that good in person ever again.

Let's do this again next year.