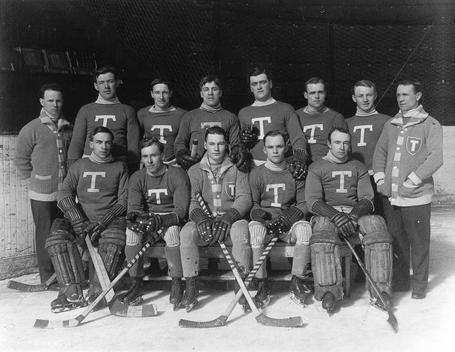 (Photo of the 1913-14 Stanley Cup champion Toronto Blueshirts via upload.wikimedia.org)

My ancestors were the people that the Pilgrims didn't like.

About 25-odd miles northish of Plymouth was Wessagusset, a second settlement that you rarely hear of.  It was established a couple of years after Plymouth and populated not with religious dissidents but with "lusty young men" who would supposedly be better at making money for their backers.  They got there too late in the season, had a lousy winter short of food, got into conflict with their neighbours and went home (for the most part) in the spring.  Some drifted back to the site over the next few years, a new village was established (modern Weymouth) and eventually a go was made of it.

This first bunch left very little written documentation behind.  Most of what we know of them comes from journals of other people, such as the journals of Plymouth governor William Bradford, who basically hated their guts.

Bradford's work became the primary source for most of the history books that followed and they've all parroted his take on the colonists to the north.  They were lowlife, scoundrels, dregs pulled off the streets of London, whatever.  Even as people go back and take a deeper look at just what Bradford wrote, nobody ever questions his take on his neighbours.  They've been defined for history by someone else.

In 1923, a member of the Weymouth Historical Society wrote a sweeping history of that first settlement.  It remains to this day the deepest investigation of who those people were.  Writing with perhaps the most thinly-veiled agenda I've ever seen, he took on the established historical perspective and suggested that rather than being a collection of pestilence-laden villains, these were in fact just grand young men who did all manner of wonderful things.  While the author laid it on a tad thick in a number of ways, he did bring up a number of good points.  The most salient of these is probably that for religious reasons, the people of Wessagusset were unacceptable to Bradford in general, and one needs to qualify his opinions based on that alone.  Bradford was not exactly a neutral observer.

In a roundabout way, this brings me to my topic.  We've already seen the first centennial celebration assoicated with the NHL (second, if you count the Cup centennial in 1993).  There's a bigger one on the horizon - that of the NHL itself, and I'm very curious as to just how it will be handled.  What will the NHL say about its own beginnings?

The NHL, of course, was founded in order to pitch Toronto Blueshirts owner Eddie Livingstone out of hockey.

That's really not in dispute.  It can't be.  It's in every history you read about the league and there's no other way to really put it.  The NHA had Livingstone in it, the NHL didn't.  The handful of surviving reports of those days make it abundantly clear that his exclusion was the whole purpose of the exercise.

The questions are really about the whys and hows of all of this.  What was it that made Livingstone so incredibly awful that the NHA would end its own existence just to be rid of him?

A couple of months ago, after much dithering, I picked up a copy of Holzman and Nieforth's Deceptions and Doublecross: How the NHL Conquered Hockey.  This book takes a fresh look at just what went on in hockey between about 1910 and the mid-1930s or so, with particular focus on the NHA and Eddie Livingstone.

It's a very good read.  I have some problems with it in much the same way I do with the 1923 book above, but there is a ton of new (to me) information in it and even though I'm going to be critical of it in places, it's definitely worth picking up and learning from.

The most important point they make is really the same point made about Wessagusset: everything we "know" about Livingstone has been provided to us by people who didn't like him.  The NHL got to write its own history and decide who the villains were.

Holzman and Nieforth did a lot of research in this, which can't all have been easy as the people involved are all long-since gone.  The other problem they faced is that virtually all sports reporters of the day were interested parties - usually in the direct employ of the local club in one way or another, or at least tied somehow to the league.  This means that the majority of articles are written to play up the interests of their employers - the other employers, the ones not printing newspapers.  (For all we grouse about hockey coverage, at least they aren't directly tied to teams' PR firms.)

The authors paint a picture of a Livingstone who, for modern readers, was part Brian Burke with a hint of Jim Balsillie.  He was a fighter who never found a loophole he didn't like, though he was careful to never actually break a rule, and he was not afraid to air things out in public.  He challenged the old boys network in Ottawa and Montreal and they drummed him out for his insolence, helping themselves to his team along the way.  People who liked Livingstone really, really liked him.  People who didn't, well, they wrote newspaper articles in Ottawa and Montreal.

Over the summer, I'd like to take various aspects of this story and talk about them.

I think it's worthwhile.  I don't think you can really understand where you are in the world without understanding where you've been, and the story of where Toronto has been is perhaps the most underreported story in hockey.  I don't think the omission has been deliberate, but it is unfortunate.

There are a lot of people who simply don't get their due because of it.