History is written by the victors." - Winston Churchill

(Not everything I write will come from Holzman and Nieforth's Deceptions and Doublecross: How the NHL Conquered Hockey, but it's a good bet that this book will have influenced it. Seriously - go get a copy and read it. It's good.) 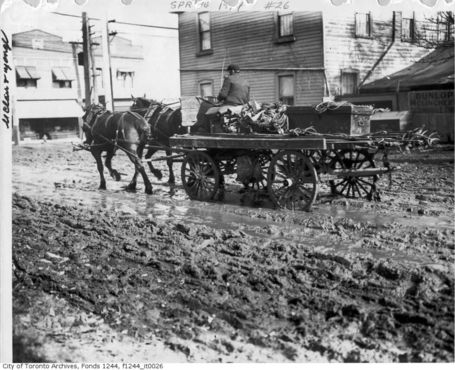 I love wading around the Toronto Archives. There is some amazing stuff there that you'd never believe existed - books, drawings, photos, history of all sorts. It's a treasure trove. Years ago, I had the opportunity to explore some of it in person. Now, I just get to check out their online material from time to time.

Much of what they have online are scanned images of photos taken as part of urban projects - roadwork, bridge expansion, even tax assessment. My favourites are the pictures from the late 1850s. Just enough landmarks remain that you can see where you are, though it's a little tough to get your bearings when you notice that everything south of Front St. was still underwater.

It's particularly cool to watch the city grow and develop. When you look at the pictures of the big old homes that used to be at Yonge and Bloor, or see the wagons fighting their way through the mud at Yonge and St. Clair, you realize just how much the world has changed in the past 100 years. 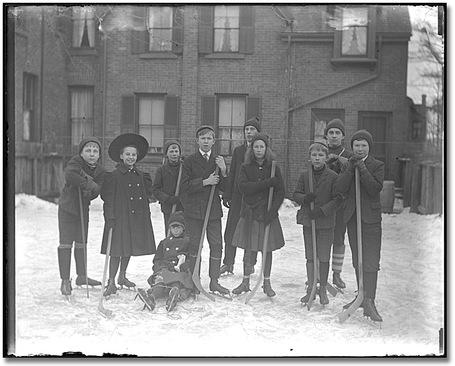 If you went back to the Toronto of a century ago, you would have seen a lot of hockey being played, though much of it was of the amateur variety. Due to the difficulty and cost of travel, there weren't big-scale high-travel leagues - more a proliferation of local pro, semi-pro and amateur circuits playing within the cities and local clusters of communities. Montreal and Ottawa had gotten a jump on the rest of the country in terms of organizing leagues and this is reflected in the number of titles they won. Between 1893 and 1912, 20 of 24 Stanley Cup champions hailed from either Montreal or Ottawa.

At the start of the 20th Century, the professional game was just taking off. It was really an American invention. A league in Pittsburgh began importing the best Canadian amateur players, plying them with promises of good paying non-hockey jobs as well as some consideration for playing hockey. It worked. A second league soon arrived in Michigan and the two leagues would play each other for the professional championship of the United States. They would merge into the International Hockey League in 1904.

Canada was dabbling with the professional game, too. There was a lot of prestige associated with winning the Stanley Cup, and it wasn't that unusual for teams to have a couple of ringers on board if they wanted to make a challenge. This was not something you wanted to be caught doing. Even prior to 1900, teams would be suspended/banished because of allegations they were paying players. Amateur teams that even played exhibition games against the pros could get into serious trouble.

You couldn't hold it off, though. The best players were heading where the money was and the strongest Canadian teams were playing at the edge of the rules already. The Ottawa "Silver Seven" were so called because the players (though supposedly amateur) were paid by the team owner in silver nuggets (not technically coinage). The Silver Seven could also arrange government jobs for players, from which they'd get time off for hockey - a nice little deal that wasn't technically illegal.

The lid came off in Canada in 1906-07 When the ECAHA (Eastern Canada Amateur Hockey Associaton) gave the green light to professionals. The Montreal Wanderers, a top team that was Ottawa's chief rival, jumped into the professional game and mixed paid professionals with their amateurs. 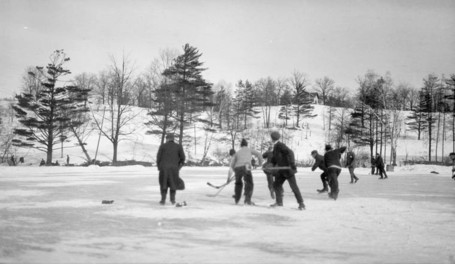 Toronto, at least through its sports pages, looked down its nose at the professional hockey, preferring instead the supposed purity of amateur sport. The fact that some of the sports writers and editors had interests in local amateur teams played some role in this as well. This was nothing unusual. If there's one thing that is seen time and again in the first part of the century, it is the inbred relationship between local sports and local sports coverage.

That said, Toronto did have professional hockey as well. The Ontario Professional Hockey League, also called the "Trolley League," was founded in 1907-08 with Toronto as a charter member. This was the first all-pro league in Canada. The Toronto Professionals had been around since 1906, playing exhibition games against pro American teams. Now they had their own league, playing teams from Kitchener, Guelph and Brantford. The Toronto entry, sporting names like Newsy Lalonde, Bruce Ridpath and Jack Marks, challenged for the 1908 Stanley Cup, losing out to the Wanderers.

The OPHL teams couldn't beat the ECHA (the ECAHA less the "amateur" tag), though. Between 1902 and 1911, every Stanley Cup but one was won by either Ottawa or the Wanderers. Those two teams were big, bad, rough and expected everyone, even their own leagues, to cater to them. The ECHA, as the de facto owner of the Stanley Cup, was the most important league in the country. With teams in Ottawa, Quebec and up to five in Montreal, the ECHA cemented the Ottawa-Quebec corridor was the most powerful region in hockey.

This was the state of affairs through the end of the 1908-09 season.

As a side thought, that challenge by the Toronto Professionals was 100 years ago this past season. Had they won, I suppose we'd have heard more about it, but it's just another case of history we don't celebrate. 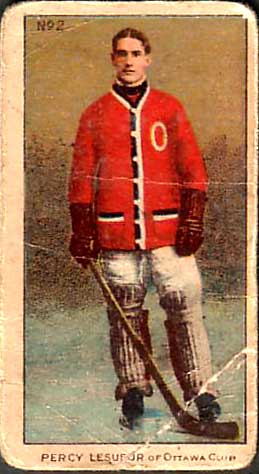