Editor's Note: 1967ers continues to provide us with an education on the NHL's prehistory with a look at how the original senators were dirty cheaters and how jealous owners saved us from multiple teams in Montreal*.

* That may not be what is actually described but it's still educational and interesting.

(Not everything I write will come from Holzman and Nieforth's Deceptions and Doublecross: How the NHL Conquered Hockey, but it's a good bet that this book will have influenced it.  Seriously - go get a copy and read it.  It's good.)

Giving the Devils Their Due - the Sens and Wanderers 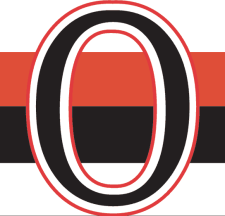 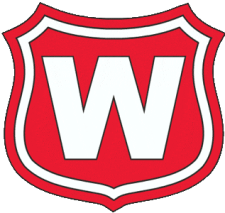 The two most prominent teams in hockey a century ago were the top dogs of the ECHA - the Ottawa Senators and the Montreal Wanderers.  Between them, they basically owned the Stanley Cup for a decade and sported the biggest names in hockey in their lineups.  A team facing the Sens and Wanderers of 1908-09 would be like a 1984 team stuck in a division with the Oilers and Islanders.

I've mentioned (well, more like implied) elsewhere that one of the things that would cause trouble for Toronto's Eddie Livingstone was that he ran headlong into the sense of entitlement of these two teams.  They were the established power brokers and didn't take well to being called out by a Toronto-based newcomer.  I'd like to look a little bit at why they might have felt the way that they did.

One huge difference between the world as it is now and the world as it was then is the relationship between the clubs (really, that's what they really were at the outset) and the league.  Today, the league is the eternal thing while teams tend somewhat to come and go.  Back then, the league was an ephemeral thing.  Clubs would move from league to league.  If the league's directors did something to anger the clubs, particularly the marquee clubs, they would quickly find themselves directors of a league with nobody in it, while the clubs set up a new circuit more to their liking.

As of 1908, the typical lifespan of a league was maybe five to seven years.

Within a decade of 1908, this relationship would be tilting in the other direction, and within two, clubs  would operate completely at the whim of the league (by now, the NHL under Calder).  During the mid teens, when Livingstone was part of the NHA, clubs were just starting to find out that they couldn't get away with murder - not always, anyway.  That didn't mean they weren't still going to try, however. 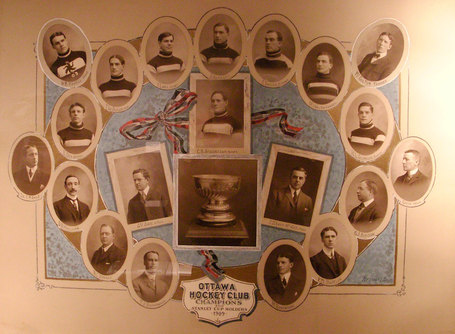 (Note: The Ottawa Hockey Club was known by a number of different names over its first 25 years - including the Generals (till 1902), Capitals (sometimes but really not very often), the Silver Seven, and the Senators - for the sake of consistency, I will refer to them as the Senators.)

The Ottawa Senators are one of the grand old teams of hockey.  The club's organizers had watched hockey being played at the Montreal Winter Carnival of 1883.  This was one of the first great showcases for the game of hockey (this tournament defined the national champion at the time) and they were hooked.  They came back to Ottawa and quickly organized the Ottawa Hockey Club.  Lacking anyone to play, they simply practiced until they could take part in the Montreal Winter Carnival of 1884. 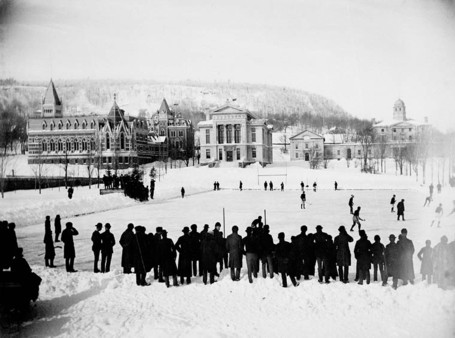 The Senators seem to have mainly played in the Carnival for the next couple of years, then were one of the charter members of the AHAC - the Amateur Hockey Association of Canada (the second organized league in the country).  They sat out from 1887-89 due to the loss of their arena, then were charter members of the OHA - the Ontario Hockey Association, while still playing games in the AHAC.

A dispute (which the Sens were part of - see below) within the AHAC led to the formation of the CAHL in 1899.  The Sens played there until 1904.  They played as an independent for one year, then joined the new Federal League (FAHL), the ECAHA a year later, briefly headed the Canadian Hockey Association in 1910 and then became part of the NHA. 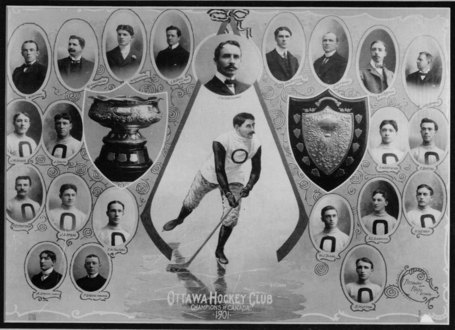 
Ottawa showed its willingness to take the ball and go home as early as 1894.  That was the year they resigned from the OHA over a dispute as to where the championship should be played.  In 1898, they (along with Quebec and the Montreal Victorias) effectively ended the existence of the AHAC over the admission of the Ottawa Capitals, who were accused of paying players.  The clubs formed the new CAHL and expressly denied entry to the Capitals.

In 1904, as Cup champions, the Senators got into a dispute with the CAHL over the replaying of a game.  They left the league and played nothing but Cup challenges for a year.  They then joined the Federal League, staying one year before joining the ECAHA.

The Silver Seven were so called because one of their executives gave the players silver nuggets as a reward after winning the 1903 Stanley Cup.  The players, as amateurs, were not supposed to be paid for their efforts, but the nuggets were not legal tender, so they got away with it.  Ottawa was said also to have a bit of an edge in that they could arrange for government jobs for players, from which they could get leave to play hockey.  That said, during the amateur years, most if not all the Ottawa team was actually from the Ottawa region, so the job enticements are likely more prevalent in the professional era. 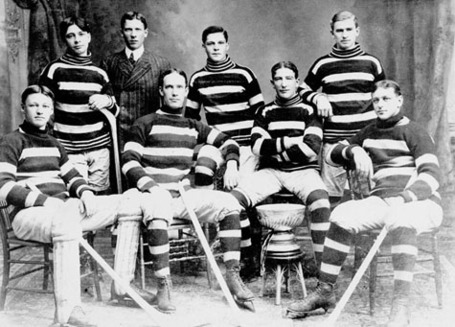 
The Senators were also adept at finding creative ways to win games:

The Silver Seven were well-known for the number of injuries that they inflicted on other teams. In a Stanley Cup challenge game in 1904, the Ottawas injured seven of the nine Winnipeg players, and the Winnipeg Free Press called it the "bloodiest game in Ottawa."[32] The next team to challenge the Ottawas, the Toronto Marlboroughs, were similar treated. According to the Toronto Globe:

The style of hockey seems to be the only one known and people consider it quite proper and legitimate for a team to endeavor to incapacitate their opponents rather than to excel them in skill and speed ... slashing, tripping, the severest kind of cross-checking and a systematic method of hammering Marlboroughs on hand and wrists are the most effective points in Ottawa's style.

According to one player, the "Marlboroughs got off very easily. When Winnipeg Rowing Club played here, most of their players were carried off on stretchers." This style of hockey would continue for years to come.

Compared to the Senators, the Wanderers were a much newer entity.  They had only come into existence in 1903.  Many of their players had been with the Montreal HC team that won the Cup in 1902.  They were a Federal League team along with the Senators and jumped to the new ECAHA with them in 1906.

Despite being such a new club, the Wanderers quickly became the biggest thorn in the side of the Senators.  They mounted their first Cup challenge versus Ottawa in 1904.  The first game, played in Montreal, was a 5-5 tie, which required a re-match (not entirely sure why).  The Wanderers refused to continue unless the game was replayed in Montreal.  They wound up forfeiting and losing their challenge.  This was the source of bad blood that would continue for years.

The Wanderers got a second crack at Ottawa in 1906.  The teams tied for the ECAHA lead and the Wanderers won a two-game total-goals playoff to take over as Stanley Cup champs.  They'd defend the Cup successfully through 1909 (with a two-month exception in January 1907 when they lost to a Kenora team from whom they'd take the Cup back in March).

When the ECAHA went pro in 1906, nobody did it better than the Wanderers.  By 1908, when they faced the Toronto Professionals, they had five hall-of-famers amongst their seven starters: Moose Johnson, Hod Stuart, Riley Hern, Lester Patrick and Ernie Russell. 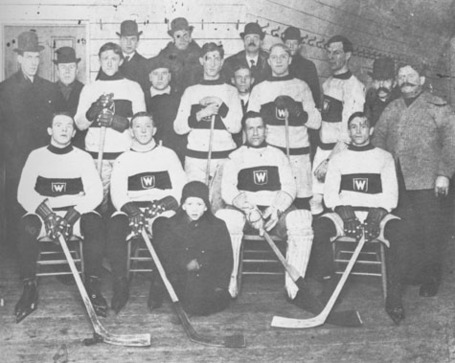 The NHL would be formed in 1917 to turf Eddie Livingstone out of hockey.