Is This an Elaborate Joke?

Share All sharing options for: Is This an Elaborate Joke? 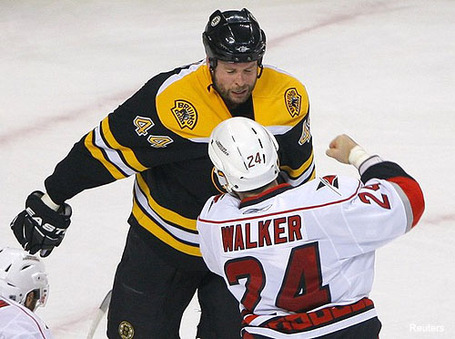 Remember kids, it's ok to be the third man in and sucker punch someone without their gloves off or their hands up as long as you play for a crybaby southern strategically located growth franchise.

I don't care if you're a Hurricanes fan, a Bruins fan, or even a fan of hockey in general. Scott Walker's third man in instigator sucker punch is a gutless despicable and completely indefensible act. Everyone I've talked to has said as much. Apparently the NHL doesn't agree. They lifted Walker's automatic suspension for getting an instigator penalty with under five minutes remaining.

So once again the NHL wheel of justice spins and this time Scott Walker receives "get out of jail free" narrowly avoiding "suspended for life". (He may have also acquired a Free Spin and a trip to Barbados). What happened to suspensions for players sending messages in games that were already decided? Does that only apply to teams where the fans show up to games the whole season?

The solitary good thing that will come out of this is watching Sean Thornton literally kill Scott Walker on the ice in game six. Tim Conboy is already relieved to know that he won't be the Bruins' number one punching bag again.