Editor's Note: 1967ers continues his look at hockey history leading up to the creation of the NHL. As he notes, it's incredible the parallels that can be found in these posts from the backroom dealings to fights over a salary cap (!).

(Not everything I write will come from Holzman and Nieforth's Deceptions and Doublecross: How the NHL Conquered Hockey  - actually, quite a bit isn't - but it's a good bet that this book will have influenced it.  Seriously - go get a copy and read it.  It's good.  Wikipedia is also your friend.)

Goodbye and Good Riddance - the Birth of the NHA 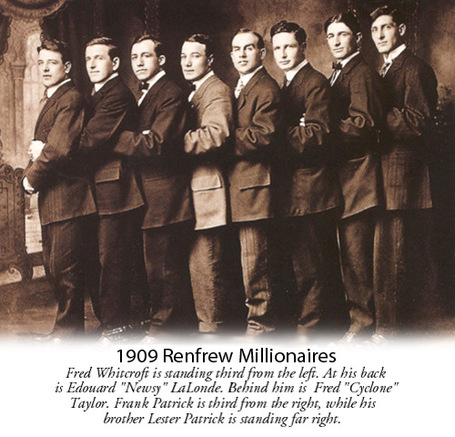 (via www.geocities.com - The Renfrew Millionaires - how did these guys lose?)

A lot of stuff has happened since I first began to write this one.

At one point, I had compared Toronto's Eddie Livingstone with a combination Jim Balsillie/Brian Burke.  I had been sort of shying away from that, particularly the Balsillie aspect, but recent events make me think it was a pretty good comparison.

If you look at what's going on right now, with an outsider at loggerheads with the president/commish, lots of personal animosity, owners being stripped of franchises, teams moving hither and yon, Hamilton likely getting hosed again and everything playing out in the press - well, it's not a dead ringer for 1916, but it's as close as we're going to get.

I hadn't got to 1916 yet, though.  I was only at 1908 where, well, pretty much the same thing was happening, as it would continue to do until hockey was firmly under the thumb of the NHL leadership and all the lawsuits had finally run their course.

In 1908, the ECHA (less the 'A' for amateur because that had gone by the wayside) was still the home of the Stanley Cup champions - either Ottawa or the Wanderers, because if one wasn't champion, the other was.  It was the dominant league in hockey.  There were numerous other professional, semi-pro and amateur circuits out there, but if you judge a league by where the strongest teams resided, the ECHA was it.

There was some interesting work afoot prior to the 1909-10 season, though.  Two new factors were in play - the Wanderers had new ownership and J. Ambrose O'Brien wanted in.

The Wanderers were the more pressing cause.  The way the finances worked in those days was that after any given game, the arena took the lion's share of the gate and the balance was split between the home and away teams.  The new owner of the Wanderers, P.J. Doran, actually owned his own arena - Montreal's Jubilee Rink, and wanted to move the Wanderers there.  The problem was that it was significantly smaller than the arena where the Wanderers currently played.  The Wanderers would get to double dip, but visiting clubs would get hosed on gate receipts. 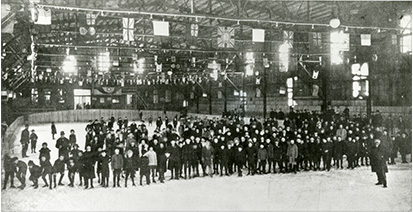 (via ourhistory.canadiens.com - The Jubliee Rink in Montreal)

Obviously, the other clubs in the ECHA were less than pleased about this, but weren't really in a position to force the Wanderers to do their bidding.  They chose instead to do what they'd done in 1899 when the AHAC had been abandoned due to the conflict over the Ottawa Capitals.  They picked up and went to a new league, dubbed the Canadian Hockey Association (CHA).  The Wanderers were left out in the cold.

The other piece of business was with Mr. O'Brien.  He had a team in Renfrew that played in the Federal League, a semi-pro circuit that had once had had both Ottawa and the Wanderers as members.  There was a mining boom in that part of the province, and O'Brien had lots of money to spend.  He wanted his Renfrew team to have a crack at the Stanley Cup.

Now - wanting Renfrew to play for the Cup wasn't really that outlandish.  Just two years earlier, the Kenora Thistles had knocked off the mighty Wanderers and taken possession of the trophy, though they only held it for two months (the Thistles are worth a post in and of themselves, though I'm not sure they will get it).  Kenora was a town of just 4000 when they won it.

The biggest change since Kenora's victory was that the professional game was in full swing.  The Thistles were the last amateur team to win, and they beat the professional Wanderers to do it.  They'd since lost most of their players to the pros.  If you wanted to compete, you needed the best players, and they now cost money.

The new members of the CHA, though, wanted no part of Renfrew.  They had a tight little group of teams - three in Montreal (All-Montreal, le National and Shamrocks), one each in Ottawa and Quebec City.  No need to travel out to Renfrew, which was in pretty much the wrong direction from everyone and was just a wee bit small.

This rejection led to the famous meeting in the hotel between O'Brien and Jimmy Gardiner of the Wanderers - shut out of the CHA, they decided to make their own league.  The National Hockey Association (NHA) would have the Wanderers and Renfrew, plus O'Brien would back teams in Cobalt and Haileybury as well as an all-francophone team in Montreal called Les Canadiens.  They adopted the old ECHA constitution and were off to the races. 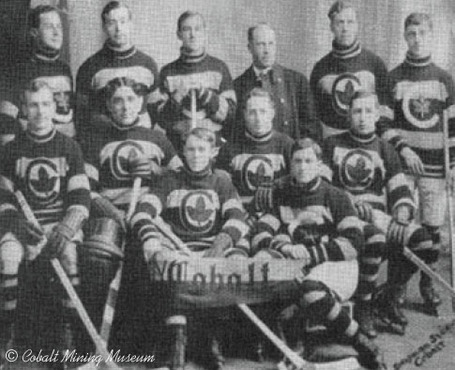 (via www.cobaltmininglegacy.ca - The Cobalt Silver Kings, then of the Temiskaming League, soon a charter member of the NHA)

The CHA, for their part, had more trouble getting off the ground.  After only a handful of games, the league was clearly in trouble.  People simply weren't coming out to the games in sustainable numbers.  Pride was swallowed and merger talks between the NHA and CHA were held.  In the end Ottawa and the Montreal Shamrocks were added (while Quebec would join a year later).  The other Montreal teams folded and the CHA ceased to exist.  The NHA erased the games that had been played and restarted the season with seven teams.

As an oddity, O'Brien, who wasn't really interested in footing the bills for four teams, offered Les Canadiens to the owners of Le National, one of the Montreal clubs that was vanishing along with the CHA.  They turned him down.

O'Brien had set out in earnest to build a Cup winner.  Prior to the season, he added Cyclone Taylor and the Patrick brothers - Lester and Frank.  He signed Bert Lindsay (Ted's dad) to play goal.  The salaries were huge.  The Patricks got $3000 each, Cyclone Taylor got a reported $5000.  The Renfrew Creamery Kings picked up the nickname "Renfrew Millionaires."  This was a team built to win.

The Millionaires were also one of the first teams to prove how tough it was to buy one's way into a Stanley Cup.  Even after adding Newsy Lalonde, they only finished third.  The Wanderers won the Cup that year and then defended it against Edmonton. 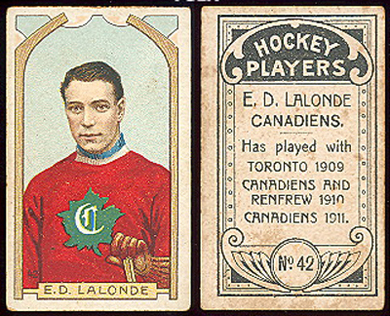 The financial strain proved to be a bit much for O'Brien, too.  For 1910-11, Cobalt and Haileybury disappeared and O'Brien gave up ownership of the Canadiens in what must have been one of the easiest settlements ever made.  He'd make a go of it in Renfrew for another season, though this would prove to be the last.  Renfrew couldn't generate the kind of money it took to pay the big names.

There was also labour conflict over the planned imposition of a salary cap, proving that nothing under the sun is ever really new.

It was becoming very apparent that to really make bigger money to pay for better teams (and make better profits), you needed bigger markets with bigger buildings.  The travel-averse NHA clubs began looking a little farther afield.  There was a good-sized city a little ways away that hadn't had a pro team since the Professionals stopped playing in 1909 - Toronto.

After 1910-11, the NHA decided that the two dormant O'Brien franchises would look really good in Toronto.  You had to have TWO teams there, of course, or the travel simply wouldn't be worth it.

One other event - the Wanderers had been sold again.  This time, they were picked up by Montreal businessman Sam Lichtenhein, who also owned baseball's Montreal Royals.  He was well-heeled, imperious, outspoken and not afraid to throw his weight around.  Right off the bat, he got into it with the owners in Ottawa over the rights to Cyclone Taylor.

And this is where things start to get fun....