Share All sharing options for: With the 7th selection in the 2009 SBN Mock NHL Draft...

The hockey wings of the SB Nation Megaverse are running a mock draft. Three picks are being made a day, with the master list running through James Mirtle's From the Rink. He'll update the list each day with the next picks and links to each blog's rationale. Today, it's our turn.

As Chemmy and I approach the microphone here is how things currently stand: Tavares has gone 1st overall and Brayden Schenn and Jared Cowen are off the board despite repeated threats to RudyKelly and OdinArnold not to dare take them.

With the seventh selection in the SBN Mock Draft Pension Plan Puppets is proud to select from Timrå IK of the Swedish Elitserien Magnus Svensson-Pääjärvi! Or is is Magnus Pääjärvi-Svensson? Or just plain old Magnus Pääjärvi? Either way, Bob Cole just had a stroke. 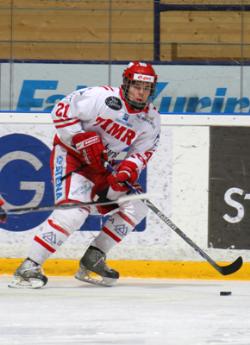 The process of coming to this pick was actually pretty interesting. When James finally aceded to my request for a mock draft Chemmy came up with the brilliant idea of involving the community here to exploit the wisdom of crowds in order to make the Leafs' selection (this is funny in a second). We obviously meant to go further with our Draft Board series but once the initial picks started getting made they came in at a fast and furious pace. We barely had time to send our first threat to Dominik and he had already selected Tavares. Turns out, we kidnapped the wrong kid. Whoops!

Anyway, when it came our turn to pick Chemmy decided that another Swede, Oliver Ekman-Larsson, had caught his eye. He forwarded me Holly Gunning's mouth-watering review of the fast-rising defenceman and suggested that we have a final Battle of the Fancy Names in order to make OEL our pick over MPS/MSP/PMS. There also seemed to be the same amount of flip-flopping going on in the community at large (or at least the ones voting in the polls) as Magnus' initial post's comments seemed to indicate a preference for Brayden Schenn or Jared Cowen. However, by the time Chemmy used his abacus to tabulate the votes MPS (just release a statement with your preference for the love of God) was ranked 5th on the draft board. Of course, that new poll promptly bumped him down to 7th. Maybe trusting mobs wasn't the best idea?

So what are the Leafs getting with this imaginary draft pick? They are getting a 6'1", 200lbs (he's already got a man's body!) left-winger that has already played a season and a half against men. They are getting a kid that had his own Hockey's Future thread when he was 14 years old. To say he's been tracked by those interested in underaged hockey players (no, not in the David Frost way) is an understatement. They are getting this kid:

That's a pretty good endorsement from the Head of the Central Scouting Service EJ Mcguire. Magnus is a product of the same SEL team that developed Henrik Zetterberg and if you dig into the comments in Steve's post you get a clear picture of what Magnus has accomplished so far. He's been the best Swedish teenager since Markus Naslund and Peter Forsberg played on a stacked Modo team in the early 90s. Our very own bkblades gives an impassioned defence of his love of the Swinnish star:

I’ve been a Magnus fan, probably the biggest on this board, so my thoughts are this about MPS. The fact that Magnus is holding his own against men shows me his development is on par with prospects developing in the AHL. I don’t quite understand the hesitance about him not dominating against peers 10 years older than him. First off, MPS doesn’t get big minutes in the SEL just like any other young player that makes it to the elite leagues in Sweden, Russia, Finland, etc. If he routinely gets 11-13 minutes a night, it’s not surprising he’s not racking up points. As comparison of MPS’ 17 points as a 17 year old, Malkin only got 12 points of the same age in the old RSL. Ovechkin 23 points. Markus Naslund and Peter Forsberg scored 19 and 17 points respectively (albeit, in much less games, but ice time is not available so I can’t be sure if they both also played only 10 minutes like MPS). One common thread amongst all these players is that they exploded at age 18 – an age Magnus hasn’t reached yet.

Magnus provides the Leafs with the top-end talent among the forward ranks that has been missing since his countryman (eventually) decided that he wanted to see what all of the "Vancouver is so rainy" was all about. No, he didn't put up over a point a game last year but he also wasn't playing against boys. If you want to get a better sense of his personality listen to this interview with Hockey's Future. Some of the highlights include his work to improve his ability to create offence at full speed, his love for everything that the NHL game offers, and a thoughtful response to whether he'd be ready to come over next year. It's certainly tough to know how things will play out at the draft but this is one scenario that I would be happy seeing firsthand. If he's as good as the last highly touted Swedish forward the Leafs picked up I'll be glad to worship him as I watch him re-write the team's record books before hating his guts for at least five years.

So what is your verdict PPPers? Are you happy with the draft pick? If this is how things play out will you think that the Leafs got a steal at 7th?