Editor's Note: You guys are going draft crazy. Here is another contribution from a Red Wings fan that took no offence whatsoever to daoust's masterful spreadsheet. Do you hear that crazy Wings fans? Stop being so damn sensitive especially if you are going to call Crosby "Crysby". Also, check out The Falconer's post that looks at where stars are born.

Daigle’s case is a perfect example to reference in remembering that not all who are drafted into the NHL are talented enough to play in it, and that draft order may not necessarily reflect talent; see 2002 last overall pick Jonathan Ericsson. Properly assessing talent is not an easy job. If it were, people wouldn’t get paid lots of money for doing it right. However, as both Ericsson and Zetterberg can attest, even professionals get it wrong on a regular basis.

And that’s what got me thinking; what is the current makeup of the league in regards to draft picks and free agents? Does being a high draft pick help your chances of making it to the big stage? Should you prep yourself for a future in the ECHL (Go Toledo Walleyes!) if you’re selected in the 7th round? Just how good at evaluating talent are these scouts and GMs really?

Side note: There is no place I could find, on any of the internets, that let you look at a current NHL roster and see a listing of how those players entered the league; either via the draft or free agency. So my only option for acquiring all the necessary info was to log onto nhl.com and look up players one by one from their teams’ roster pages. Yes, that’s right. I visited all 783 player pages on nhl.com…in one day!! And let me just say, there are some ugly ass professional hockey players. 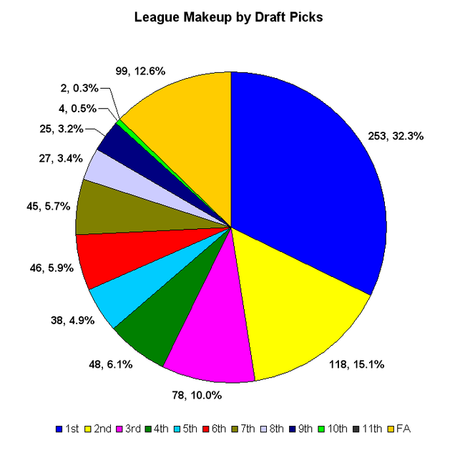 From the chart you can see that nearly one-third of all current NHL players were selected in the 1st round. When you stretch that out to encompass rounds 2 and 3, you get 55% of all current players. From this it seems that, yes, scouts and GMs are pretty good and seeing NHL caliber talent and drafting accordingly.

But then look again, 45%, or 350 players that have passed the test to become worthy of an NHL roster spot were selected after the third round, or even undrafted all together; nearly 100 players in the NHL today did not garner enough interest at a younger age to be drafted, but grew to prove, through college, juniors, or foreign leagues that they had the chops to play in the NHL.

Side note: Those two current 11th round picks? Nashville’s Scott Nichol: 1993, 272nd overall to Buffalo, and Minnesota’s Kim Johnsson: 1994, 286th overall (that’s dead last!) to NYR. You might remember Johnsson as being part of the Lindros to NYR trade in 2001.

Moving along, a lot of discussion has been made recently (egged on by the masterpiece that is Daoust's Draft Spreadsheet), about whether or not certain teams are good at drafting. It's quite hard to judge a team's drafting prowess based on on-ice performance (the only kind that matters), because no team is made up completely of their own draft picks. Trades are made, players are moved, free agents are signed. It's just not an easy thing to do.

So instead I sought to see if a team made up primarily of high draft picks was also a successful team on the ice. I also examined each team's current roster and calculated their Average Draft Pick (ADP). I calculated ADP by simply summing up the rounds in which each team's players were drafted and divided it by the number of players on that team who were drafted.

I also tallied up the number of free agents on each team to help make comparisons. As you'll soon see, Pittsburgh (the #1 team in the league) has 8 free agents. Whereas, Chicago, a team that finished 3rd in the post-season this year (yes, ahead of Carolina) has no free agents. It's hard to provide a "draft round" for free agents as the talent varies greatly, so I left them out of ADP calculations. 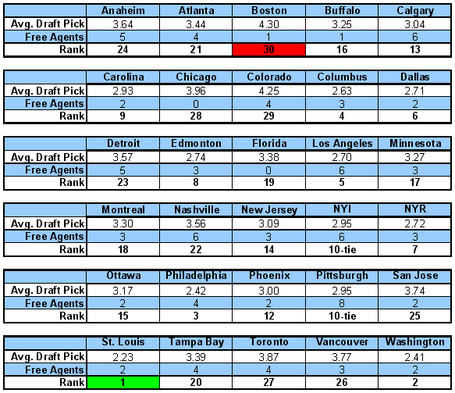 From this chart, no real correlation can be made relating high draft picks to overall team success. Boston, the 2nd best regular season team this year, has the lowest ADP of 4.30 and 1 FA. Whereas the young upstart Blues and Capitals are 1 and 2 in ADP with only 2 FAs apiece.

So is drafting good talent earlier in a draft important? For the league? Yes. For a team? Who knows. But it certainly can't hurt, can it?