The rest of post #9. I gotta make these smaller.

We've talked about Scotty before - the Captain and leading scorer of the 1914 Cup winners who enlisted for war that year and would not come home. Had he survived, who knows what he would have done?

Allan "Scotty" Davidson was a one of the more phenomenal talents of his time. He dominated in junior and was an impact player in the NHA before he was lost while serving his country in World War I. He was remembered as a powerful skater with a lethal shot who back-checked responsibly and played the game cleanly.

In 1912-13, Davidson was signed by the Toronto Blueshirts of the NHA. He lined up at right wing and quickly made himself indispensable with 19 goals in 20 games. The next year he scored 23 times and was a leader on the squad that won the Stanley Cup in 1914. Davidson enlisted for military service after World War I broke out in 1914 and was killed in Belgium on June 6, 1915. The former star whose career was far too short took his place in the Hockey Hall of Fame in 1950.

Since in-uniform pictures of Tecumseh players are only slightly less rare than hen's teeth, I'll do the picture and write-up of Con there instead.

Like teammate Cully Wilson, Minnie played a rough game. His 131 penalty minutes trailed Wilson, but given that he only played 18 games, he wins out on a minutes-per-game ratio (7.27 to Wilson's paltry 6.9).

The HHOF has nothing on Minnie, but Wikipedia fortunately bails me out. This is their write-up. It's kind of interesting:

Roy McGiffin played amateur hockey from age 15 with the Coldwater Hockey Club, moving from there to Toronto Simcoe, Toronto Amateur Athletic Club and back to Toronto Simcoe for 1909–10. He played the 1911–12 season for Cleveland of the United States Amateur Hockey Association, before turning professional with the Toronto Blueshirts in 1912–13. He played three seasons with the Blueshirts before retiring after the 1914–15 season.

In the 1914 Stanley Cup challenge of Victoria against the Blueshirts, McGiffin scored the game-winning goal of game two.[1] That season, he led the league in penalty fines of $116.[2]

In a 1915-02-17 regular season game against the Ottawa Senators, McGiffin became involved in a fight with Art Ross that ended with both players being arrested by Toronto police.[3] After spending the night in jail, both players were fined $1. McGiffin lost a coin toss with Ross and paid both fines.[4] The referee of the match Cooper Smeaton wanted McGiffin barred from the league, denouncing him as a rough player.[5]

After the 1914–15 season, he quit hockey for business and moved to Dinuba, California.[6] He had lived there previously for a year from 1910–11 after his junior hockey days. He died in 1917 in an airplane crash.

Like Con Corbeau, George (and his two brothers) become more interesting later. We'll save him for now. 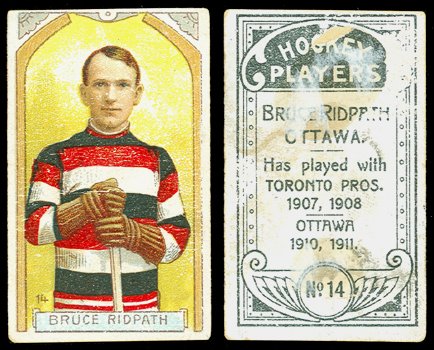 Ridpath was the original coach of the Blueshirts. He only put in the one season before moving on. Bruce had been quite the player in his time - he was one of the 1908 Toronto Professionals and then was a star in Ottawa before being struck by a car on Yonge St. His skull was fractured in the accident and his career was over.

The benefit game for Ridpath was one of the flashpoints in the fight over Cyclone Taylor. Taylor wanted to play in the game for Ottawa, the Wanderers refused, and Cyclone ended up paying his own way in and reffed the game for free. (Holzman/Nieforth)

The HHOF has no write-up here, either, but Joe Pelletier does:

Bruce Ridpath was a high scoring right winger who netted better than a goal per game in his four years of professional hockey.

Starting out with Toronto in the Ontario Professional Hockey League, Ridpath helped the team skate to the league championship in 1908. Unfortunately, the Toronto Professionals lost a challenge to the Montreal Wanderers for the Stanley Cup that season.

Ridpath would taste Stanley Cup success soon enough, however. In 1910 he joined the Ottawa Senators and immediately settled in on a line with Marty Walsh and Dubbie Kerr. The trio were hockey's highest scoring line, especially in the 1911-12 season. Ridpath scored an impressive 22 goals in 16 regular season games then added 4 more in 2 playoff games as the Sens won the Stanley Cup.

Ridpath was on his way to a glorious hockey legacy before tragedy struck. On Toronto's busy Yonge Street an automobile ran into him, fracturing his skull. Though he attempted a comeback, the accident cut his career short in 1912.

Ridpath died far too young after suffering a severe stroke in 1925. The never-married Ridpath was just 40.

Gads - that took a long time.

Next - Those other guys, the Tecumsehs.