The Arrival of Eddie Livingstone

The Churchill quote I've put at the top of these things is true in innumerable cases. The story of Eddie Livingstone is simply another. His treatment at the time and the way he has been subsequently remembered certainly isn't the biggest injustice in the world, but it was an injustice nonetheless.

Holzman and Nieforth set out to right this wrong in their book (linked above - go buy one, it's a good read and you can't have my copy because you'll spill something on it). Like all attempts at combating an established narrative, they overreach at times and their agenda comes across a little too plainly. I don't think all their conclusions are supportable. Enough of them are, though, that it's pretty clear that "Livvy" did indeed get hosed and the "crimes," as they were, of the rest of the NHA/NHL governors were at least as bad, and typically far worse, than his. The book succeeds in what it attempts to do, at least within its own pages. Whether it changes the perception at large will be another story. The test will likely come in about six or seven years as the NHL centennial approaches.

The most important thing that Holzman and Nieforth do in laying waste to the existing storyline is establish the actual timelines of the events in question. Problems attributed to Livingstone turn out to actually predate him. Other events look very different when put in a fuller context of what was happening at the time. Things that appear outlandish in isolation look a lot less so when one sees what other factors were in play.

How will we talk about Eddie Livingstone?

I don't particularly want to regurgitate Holzman and Nieforth's arguments when I talk about Livingstone. There are a number of reasons for this. Most importantly, they have their ways of setting up the story and I have mine. I'm not doing a book report here and further, plagiarism really isn't my bag. At the same time, they have written what I consider to be the definitive book on the subject and as a result, a good portion of anything I write on Livingstone will owe a lot to them. It's inescapable.

As a result, this part of the series will probably be more about impressions than hard numbers. The hard numbers are in the book for any who wish to see them. Again, go get one. It's worthwhile.

Who was this guy?

Aside from setting up the timelines, one of the things Holzman and Nieforth (I need an acceptable short form here, H&N may have to do) take time to do is to set out the personalities of the people involved. So much of what would play out over the aproximately 20 years of conflict is the result of personality conflicts between a very small number of people. There are untold stories still in there. I find it interesting that a person with a reputation for integrity and character like Frank Calder would come to do the things he did. I wish there was more time spent in investigating that transition. It's a loose parallel to the Anakin Skywalker story except that Vader winds up becoming the emperor rather than offing him to save Luke.

Livingstone's personality is a bit of a different matter. In the first of these, I compared him to a Burke/Balsillie hybrid, though with a lot more Burke than Balsillie. I still think that's not unreasonable. The sort of people who don't like Burke wouldn't have liked Livingstone either.

Eddie was kind of an unassuming-looking person. I expected someone more out of the bombastic Ballard model. Eddie Livingstone looked like an accountant. His features suggest a somewhat shorter Ace Bailey sporting a pair of Edwardian-era wire-rim spectacles. (Those aren't glasses - if you see the picture, they are clearly specs.) 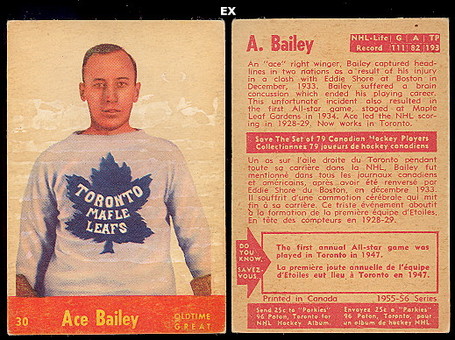 (Ace Bailey - just add specs and you have Eddie Livingstone - via www.gfg.com)

Appearances aside, Livvy was a competitor. He was the second son, the one who wasn't his older brother. His outlet was sports and he played a lot of them with varying degrees of success. In hockey, he was a mucker - not a lot of size or talent but loads of effort.

As he got older, he stayed in organized sports. Like many other sporting figures in Toronto, he worked as a reporter and often covered games he was involved with as a referee, coach or organizer. He was into amateur football, rugby and hockey. In football, he was secretary of the ORFU (Ontario Rugby Football Union) - a position parallel to Calder's in the NHA - and himself had to choose to suspend a team, which makes for interesting parallels later.

His greatest success came with the Toronto Rugby and Athletic Association (TR&AA, which to me deserves an award for being the least convenient set of initials in the history of sport). He led them to multiple amateur championships in hockey. While the Blueshirts and Tecumsehs/Ontarios were drawing as best they could, the attendance records in Toronto were being set and held by Livingstone's TR&AA teams as they went for glory.

When Tom Wall decided to sell the Ontarios, Livingstone seemed like the natural choice. He was a significant hockey figure in the city and he had a habit of winning things or at least putting solid teams together. The papers speculated that he'd be a good owner. The NHA thought so too. He was approached about buying the team.

Note - he didn't barge in to the professional ranks. He was recruited.

Shortly after it was announced he was buying the team, one paper speculated how interesting it could be to have Eddie Livingstone and imperious and fiery Wanderers owner Sammy Lichtenhein together in a room. Sparks were forecast. And they came.

Livingstone had gotten where he was through competitiveness and drive, along with a stubborn streak a mile wide. Like most people of that description, if he could find an edge, he'd use it. He was great at finding loopholes he could exploit, variations that weren't particularly against the rules, but certainly weren't the commonly accepted way of doing things. If one looks at the trade the Leafs made whereby they effectively bought an extra fourth-round pick in exchange for taking on salary, that's a Livingstone sort of move. If we think of Roger Neilson sending a defenseman out in place of a goaltender on a penalty shot, that's a Livingstone sort of move. Some found these things to be morally dodgy, others see them as creative.

Opponents - Lichtenhein in particular - often found them dodgy, and as we've seen, they wrote the history books.

Next - Livvy buys a team (and a problem)