Five Questions for the Dog Days of Hockey Season

Share All sharing options for: Five Questions for the Dog Days of Hockey Season

These are indeed the dog days of summer for hockey fans.

The big UFAs have been signed, execs have been fired and their replacements hired, the pre-season schedule has been announced but it seems further away than Dany Heatley doing the right thing.

After the jump, five questions to help us pass the time so there's just seven weeks and four days until the Leafs open camp...

I’m way late to this one, but it’s not like there’s much going on in the world of hockey to talk about, so let’s turn our attention to Michael Jackson and celebrity deaths.

In the spirit of full disclosure, I was never a Michael Jackson fan. To my mind, the discovery that Ola Ray (the co-star of the Thriller video) had appeared in Playboy was far more influential in my young development than anything Michael Jackson ever accomplished.

Some folks are clearly fans but, to paraphrase a review of the Smith’s Meat is Murder, "he’ll never convince me one man's nut loaf isn't another man's baked nosepickings."

If a poll was conducted on June 25 on the general public's perception of Michael Jackson, I’m guessing the results would be almost entirely negative. If that same poll were conducted on June 27, one-day after the singer's death, the findings would be the exact opposite.

1. Who do you think the most despised NHL personality is, and if they were to pass-away, do you think their character would undergo a Michael Jacksonesque post-mortem transformation?

Would Sean Avery be known as a passionate athlete who’d do anything to win?

Bettman, a dedicated lawyer with a vision for a struggling league?

Cronkite presided over the evening news at CBS from 1962 to 1981, announcing major historical milestones from the death of President Kennedy to the moon landing. The Beatles did their first American Broadcast with him.

Media critic Howard Kurtz noted that Cronkite’s career cast such a long shadow because it came during a time of limited media channels and an overwhelming trust in the media.

Since Cronkite’s retirement in 1982, the media has become more splintered than the remains of a whittling contest and more contradictory than my mother in-law on her fourth glass of wine.

As is evidenced on this site (and so many others throughout the Barilkosphere and beyond) trust and faith in the mainstream media may be at an all-time low.

I was reading an old interview with Cronkite the other night and he admitted his real dream wasn’t to be a journalist, but rather:

I've always thought one of the great things in life would be to entertain people with songs and dances and funny sayings. But it's just a fantasy. Another Walter Mitty dream.

For those of you under 35 or who haven’t seen the classic cartoons, Walter Mitty was a fictional character created by James Thurber (one of the early contributors to the New Yorker) who spends most of his time daydreaming about adventures and triumphs. Cronkite continues:

Oh, my dreamworld personally is to just take off on that boat of mine and not have to worry anymore about the affairs of mankind, and about reporting them, and taking the slings and arrows from all sides as we do today, since we can't seem to satisfy anybody. After ten years of it here in this particular spot, it gets tiresome. I'd like to be loved, like everybody else.

2. What do you think your favourite sports journalist’s Walter Mitty moments are? Does Working Class Howard dream of driving a limo for the Dallas Cowboys? Does Damien Cox dream of a centre court triumph at Wimbledon or perhaps laying waste to MLSE and the ACC like the Joker going after Gotham General Hospital? 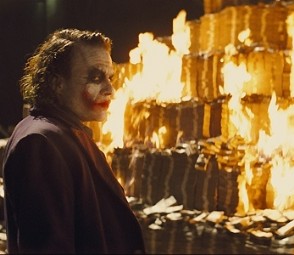 Sticking somewhat with the theme of death, Not Quite What I was Planning is a collection of six-word memoirs from the famous and obscure. Smith Magazine asked people to submit their own six word memoir and the magazine has collected some of the best in a book, which can be read in about forty-five minutes. Despite the slender size adn content, it demonstrates just how powerful six well chosen words can be. A small sample:

"I still make coffee for two."

"Found true love, married someone else"

"Adopted? Are you fucking shitting me?"

"Brought it to a boil, often" (Mario Batali)

"Well, I thought it was funny." (Stephen Colbert)

3. In six words or less, try to sum up your relationship with the Leafs (remember "Kerry Fraser's Hair" uses up 50% of your allotted words).

Since the trade deadline, Brian Burke has traded three players and acquired six, most of whom are known for their, ahem, sunny dispositions.

There has been loads of discussion, emails, web-rumours and hopes of adding a top six forward either through free agency or by dealing one of the 38 D-men currently on the roster.

4. Given the 50 contract limit, the potential for the cap to constrict and the need to clear lanes for developing players in the next few years, why the push for the Leafs to add another player to the mix now? Is the push for a top-six forward a sign of Leafs Nation’s impatience? Is this urge for another top six a signal a move towards winning more now or just a pragmatic solution for the log-jam on D?

I have no idea why, perhaps it’s something Chemmy or another New England Patriots fan could explain to me, but Elton John has been named the Pats' honorary captain for the NFL game in London this October. I presume it’s because Prince Edward and Boy George had other commitments.

5. With the Leafs scheduled to play the Flyers in London (Ontario), what celebrity do you think should be named honorary captain for the Leafs and who should get the nod for the Flyers?