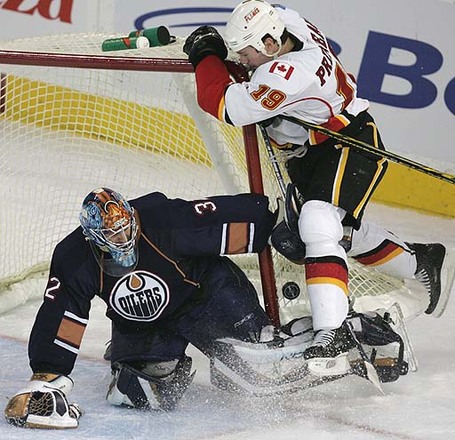 The Toronto Maple Leafs have traded Anton Stralman and Colin Stuart to Calgary for Wayne Primeau UPDATE: The Leafs also get a 2nd rounder in 2011 to make this trade slightly more palatable and they give up a 7th rounder in 2012 to make it less palatable. I always thought Stralman would be a great puck moving defenseman and a good replacement for Kaberle so off the bat I really despise this deal.

The one memory I have of Wayne Primeau is the time his big brother Keith beat the shit out of him in Hartford.

PPP Update (ie I was working on a post too!)

Ben Hankinson, the USA Director of Player Representation for Octagon Hockey just tweeted that the Toronto Maple Leafs have traded defencemen Anton Stralman and winger Colin Stuart to the Calgary Flames for centreman Wayne Primeau. This move helps clear a spot on the Leafs' blueline as well as bring them down a contract further from the limit of 50 not that I like the way in which these important goals were met.

Colin Stuart wasn't a gem of a player by any stretch of the imagination but his departure definitely solidifies the notion that the Kubina trade was more about clearing salary cap space. That space was then used to bolster the defence corps which I guess made Stralman expendable despite the fact that he was waiver-exempt and could have benefitted from a year as the top dog with the Marlies. Not to mention that he was a restricted free agent after this season so the Leafs gave up a cheap defenceman that they could control salary-wise and showed offensive potential every time he played for the Leafs.

And what did they get back? In Wayne Primeau, they picked up a 33 year old that has played 24 and 43 games over the past two seasons, has never scored more than nine goals a game 11 goals in a season which explains why I am so upset much better, and has not been a plus player since 2003 despite this scouting report on his player page:

I think that Brian Burke has taken the notion of competition a bit too far as the Leafs now have about 15 centres vying for that 3rd line role and no one really suited for the first line role. And what do opposition fans think? Well, friend of the blog and the object of Puck Daddy's commenters' affections Two-Line Pass is happy:

Any time an opposition fan is happy you know that you are in trouble. I have to hold out hope that this deal is just one step towards a bigger and more important deal because otherwise this one stinks. Calgary saved about $400K under the cap which despite being pennies still helps Old Man Sutter with his salary cap mess AND they give up a guy that didn't play for them the last two years (essentially) and was not facing tough competition at even strength and is terrible.

What are your thoughts on this move?