The Toronto Maple Leafs have signed Mike Komisarek to an awful contract that they will instantly regret.

The Toronto Maple Leafs' big signing July 1st was stealing Mike Komisarek from the Montreal Canadiens. Knowing that Canadiens fans will have to bend themselves into pretzels to hate and demean a defenceman that they have lauded as being the lynchpin of their defence while having to find ways to like a former object of derision, Hal Gill, makes me laugh. On the other hand, when I heard that the Leafs had signed Komisarek it was very hard to explain to the other churchgoers why I was yelling "NOOOOOOOO!!!!" during communion. They insisted on scheduling an exorcism but they can't get this Leaf fandom out of me! Here's what I hilariously wrote before July 1st when I still held out the hope that Komisarek would not sign with the Leafs:

There has only really been one player on the Leafs that made me physically ill to have to watch play, Bryan Marchment, and this summer the Leafs have been linked with TWO of them: Chris Neil and Mike Komisarek.

Komisarek is overrated as a defensive defenceman, he almost matches Neil for cowardice, and hits late every.single.time. Plus he still has the stink of the Habs on him and any aura that he might have had has been completely dashed by repeated decimations at the hands of Milan Lucic. The cheap crosscheck that should have resulted in at least a 10 game suspension just showed how yellow he is.

Oh for cripe's sake. Thank God it wasn't Neil or I'd still be stabbing my gap-toothed voodoo doll. Honestly, it's going to take me a lot of time to get over this signing because not only do I not care what he wears I also don't think that he's cute. But I do cheer for laundry so my gut reaction will be to cheer the jerk when he scores (out of sheer novelty probably) or if he hits or fights someone but only because I care that it helps the other Leafs. In an ideal world he'd get his ass kicked for things like this:

Gutless. Leafs-Bruins games will be interesting next year at least which is a definite upgrade over the debilitating borefests that they have been in the past. So there we go. That's how I feel about Komisarek and I know I am not the only one around these parts to hold those feelings. After the jump I am going to try to talk myself down from the ledge.

I know 'spite' isn't the best way to run a team but I like spite. So the first step towards coming off of the ledge is to realize just how irate Habs fans are at the loss of their former defensive idol to the maudit calise Maple Leafs. Dennis Kane is doing a great job of hiding his pain as he re-writes Habs fan history. The Daily Hab-it tries to pretend that he not only pities Komisarek but also that he doesn't miss Grabovski. And Eyebeleaf unearthed this nutjob. The Four Habs Fans are obviously your source for meth-induced rage filled reactions:

Fuck off and die: Komisarek to Leafs - HF29

The Leafs? Really? Wouldn't want to be Komo those Saturday night's the Leafs are playing at the Bell Centre. You think the fans hated Grabs...

At least Brian Burke showed his true idiot colours by overpaying for a guy who couldn't score with a fist full of Euros in a Amsterdam brothel. - HF33

I have to admit that that was a lot of fun to read. I asked Robert L of Habs Eyes On The Prize to give us his view on the signing as someone who's watched almost every game of his over his career:

You'll like Mike Komisarek. Of all the teams that could have had him he had to go to the Leafs! Should be fun. Here's an assessment, pro and con.

Komisarek's strengths are solid checks and shot blocking. He's aces playing a rush one on one when he's familiar with a partner who is fleet of foot. While not being a great skater he's fleet of foot enough in traffic to get in and out of tough spots. His size is often a deterrent for opposing forwards. He'll throw the occasional open ice hit in a Phaneuf / Kronwall style and knock an opponent silly should they have their head down. His shot isn't killer but fairly accurate. His first pass is crisp and poised when he's offered a split second look up ice.

Last season just about every area of his game took a dip. Had it maintained it's progression it's a certainty he wouldn't be a Leaf today. The Canadiens were counting on him going forward but, for whatever reasons, the team chose another direction [Editor's Note: They offered Komisarek $20M over 5 years]. In Toronto, if he is paired with Kaberle he should adapt quite easily to missing Markov. I've believed all season long that Komisarek played hurt in 2008-09. He's a tough SOB that way. He'll fit Burke's vision perfectly and is not overpaid at 4.5 per.

Leaf fans will love the guy. Congrats on landing him. The Buds have made a big stride towards gaining a playoff spot with this move.

True story: Fucking is actually Hal Gill's middle name. Or at least it was what my dad called him during games.

Now, one of my biggest beefs with Komisarek is that he hits players late and does not fight. He is enormous (6'4" 225lbs!) so if he's getting challenged he should be answering the bell. Especially in the years when the Habs had no other fighter or when they had the neutered Georges Laracque. Here's his entire fight card:

That's not exactly a murderer's row of opponents and he doesn't really do well at least based on the descriptions. But what about his defence? Well, Komisarek did face the toughest competition on the blueline so he was out against the opponent's best lines. Then again, he got outscored 2.39/2.50 per 60 minutes at even strength. Montreal had the eleventh best penalty kill last year and Komisarek led all defencemen in ice-time with over 3 minutes per game. Of the top five defenders on the Habs he was the only one who saw the goals against got up when he was off the ice so he was definitely a big part of the strength of the unit. The difference in goaltenders was not as marked as might be assumed either as Price only allowed 0.96 goals fewer per 60 minutes short-handed than Vesa Toskala.

On the offensive side of the coin there has been a lot of talk about how the Leafs have lost so much production in Kubina and they are replacing it with the offensive void that is Komisarek. Interestingly enough, at the suggestion of a Habs fan, I looked at their even strength numbers:

2008-2009 for Komisarek and 2006-2007 for Kubina are depressed because they both missed almost 20 games through injuries and suspensions. I don't imagine Komisarek will get time on the powerplay but as long as we have Kaberle and a defender that can hit the one-timer that lost production will be replaced. Hell, Kubina never did as well as McCabe so if the other defenceman doesn't have their stick break every shift I think that the powerplay production can be replaced internally. I obviously await Steve's analysis suggesting otherwise.

But the guy hits! Right? Well, that part is true. Last season, he was 26th in adjusted hits. Only Luke Schenn (20th) ranked higher. The next Leaf was Jeff Finger at 95th. The year before Komisarek was ranked 4th in the league. So at the very least he'll be hitting in all three zones. If all three are healthy this season we'll at least see some big hits.

The worst part of this is ceding the moral high ground. At least last year the Leafs got rid of Hollweg and everyone hated him. Now we have a 6'4" version of him and sure his defensive skills address a sorely lacking area and his presence might free up Schenn to play the powerplay a bit but it's MIKE MOTHER$&#@ING KOMISAREK! Who didn't cheer like a madman or watch the highlights 60 times when Lucic effectively ended his season? Let's not forget his stupid comments about Grabovski's clean hit or his insinuation that Kostopolous' hit was Van Ryn's fault! Now he gets the same treatment as Grabovski and Luke Schenn! OUR LUKE AND SAVIOUR, the man who can do no wrong, the man whose very smile cures 78 diseases including Habs Fandom!?! Fuck that noise.

At the end of the day I cheer for laundry so if that laundry is more successful because of him then I won't be cutting myself but I won't be happy. At least not until he drills one of the Lollipop Guild or Giggles or Alfie or someone I hate even more. Anyway, I guess I am just saying that I hate the filthy SOB but he might not be as overrated as I thought. You're still on notice. 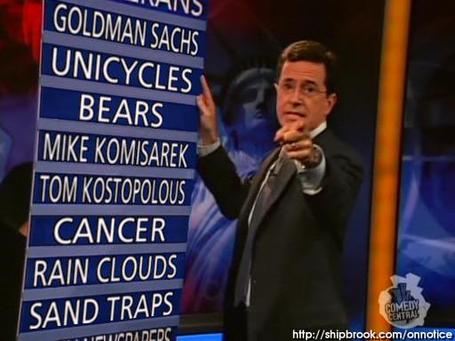