Editor's Note: In an effort to ensure that my favourite bloggers don't disappear Chemmy has managed to get He Score He Shoot's Greener to agree to join Bitter Leaf MF37 as a contributing blogger. When will his posts show up? If this picture is any indication then I guess he'll swoop in like a ninja whenever the inspiration strikes him.

When Brian Burke and his collection of thesauruses became Leafs GM last November, a (Leafs) nation so used to  absorbing the desperately polite banalities of say, Stephen Harper, or the completely made up writings of say, Howard Berger, turned on its collective heel, not quite knowing what to make of such a Sassy Sally.

Much, much, much has been made of Burke's supposed use of the word "truculent", a 16th century term meaning, in part, "fierce; cruel; and savagely brutal". I say supposed because I actually never heard him say it, and I figure it could be turning into one of those "Play it again, Sam" things; something which everyone believes was said, but never actually was.

Now before all you awesome joke killers little darlings fill the comments section with a thousand Toronto Sun links showing Burke's quote, let's just look at the point he was making when using the word: That win or lose, your Toronto Maple Leafs are going to be something we're all going to be proud of, and really, really enjoy watching.

Remember, this is a team that, just two years ago, was hoping that that plate of Hamburger Helper on skates - Kyle Wellwood - was going to be its first line centre. Wellwood, a player only a mother could love, and by mother, I mean Navin from Sports and the City, is like that girl/boyfriend from your past you just can't believe you went out with, but, you know, you're stronger now, and you'd never be that stupid again. Wellwood is an embarrassment to the fucking Vancouver Canucks, let alone the Leafs. At least the Leafs saved face by dumping him.

So what can we expect from the 09/10 Leafs? How fierce; cruel; and savagely brutal will they be? Let's ask the trembling chicken hearts beating in the "chests" of the Ottawa Senators, or the little people in Montreal who get to face the Leaf monsters all season. On Saturday night. In front of their parents. Here's a future echo of the truculence the Leafs will have this season: 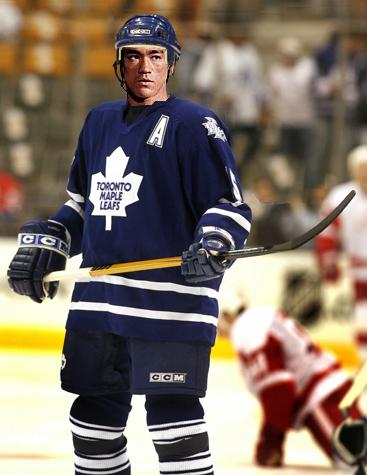