Editor's Note: 1967ers is back with his 12th installment of his illuminating summer series on the pre-NHL history of hockey in Toronto. If you thought that things were murky now...

Livvy buys a team - and a problem

The last six/eight weeks or so have been an object lesson in why one should never wish, even in passing, that things at work would pick up a bit.  Secondly, I also learned why one should never, ever, ever, under any circumstances mention to another living soul that you could potentially stand to be a little busier.

It's always more interesting for me to be writing these things when Jim Balsillie is in the news because I see so many parallels.  Character-wise, I still see more Burke than Balsillie in Eddie Livingstone, though a lot of that may be that I still have no real sense of Balsillie.  Situation-wise, I see a lot.

For the "Eddie Livingstone was a bad, bad man" crowd, the history looks a lot like this - from the mighty wiki:

Prior to the 1915–16 season, Toronto Shamrocks team owner Eddie Livingstone made two moves that infuriated the NHA and the PCHA. At that time Quebec was to be one of the designated NHA teams which the PCHA would draft players from. Livingstone arranged a trade with Quebec to hide some players from the draft, infuriating the PCHA. He bought the Toronto Blueshirts without league permission for its players, and ended up with no players for the Shamrocks team as the PCHA in retaliation raided the Blueshirts for players.[10] The league ordered Livingstone to sell his Shamrocks franchise[11], but he was unable to do so as he had only enough players for one team. The 1915–16 season was played with only five teams, a situation whereby one team each week would not play, a situation limiting team owner revenues and infuriating the other owners.[12] Instead of two games in Toronto to cover travel expenses from the other cities, there was only one per trip.

Now, to be fair to the great wiki, there are other pages that link off this one where they have different versions of this story, but this to me epitomizes the basic NHL-centric storyline.  (I should also point out that even by any normal standards, this paragraph is particularly poor - it even mixes the events of two separate seasons - it just really, really suits my purposes to have so much badness in a compressed space.)

This is another instance where the great contribution of Holzman and Nieforth (H&N going forward) is to establish the actual timeline of events.  To start with, the trade that ostensibly was to hide players from the PCHA wasn't made by Livingstone but by former owner Tom Wall.  Livvy didn't create this mess.  He inherited it.

The biggest problem with the 1913-14 Ontarios was that they couldn't score.  For 1914-15, Wall made a move to address that.  He traded leading scorer Jack McDonald to Quebec and got back Tommy Smith, brother of former Tecumseh Alf Smith. 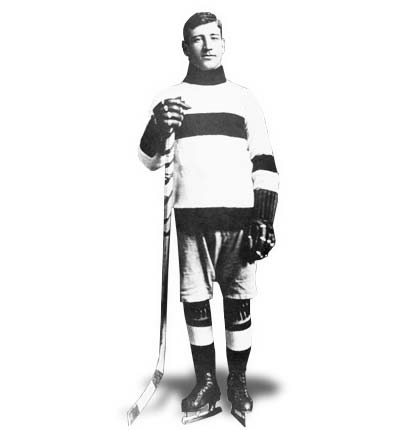 (Tommy Smith in one of many uniforms - via www.legendsofhockey.net )


Tommy was the real deal.  His 39 goals in 20 games led the NHA in 1913-14.  This was eight more than his closest rival and just 22 less than the Ontarios had managed as a team.  He was a real star in the prime of his career and this was the first time the Ontarios could lay claim to this.

At the same time, Tommy Smith was not an easy person to tie down.  The 1914-15 Ontarios were his 12th professional team since 1906 and if you read through his transaction history, it's laced with words like "Signed with team Y after jumping contract with team X."  In this manner, he played with four different teams in 1908-09 alone.  Normally, to get away with this sort of thing, you have to be really, really good.   Fortunately for Tommy, he was.

The problem that Livingstone would have with Smith was that the PCHA felt they had a claim on him.  In order to stop the player raids of earlier days, the PCHA and NHA came to an arrangement whereby the PCHA would be able to draft a single player off of three of the six NHA teams every season.  (This is still a pretty big deal, remember that teams really still went pretty much the whole season with their starting six.)  The team losing a player would get cash compensation.

One of the three teams in line to lose a body for 1914-15 was Quebec.  Whether it was to avoid losing a star for nothing or whether there was something else afoot, they moved Smith to Toronto, a team not eligible for the draft.  The PCHA drafted Smith anyway and thus began the kerfuffle as the two leagues duked it out to determine who really had the rights to Tommy Smith.  The PCHA argued that the Smith trade was made in bad faith and he was still on Quebec's eligible list.  The NHA countered that he was now Toronto property, that the PCHA had been made aware of the deal prior to the draft and Smith would play as a Ontario.

For Livingstone's part, he bought a team with a star player under contract and he intended to play him.  He made a number of other moves to shore up his team (more on this in the next couple of posts) and they got off to a much better start, going 4-3 in their first 7, including a 3-game win streak.  (Remember, this team went 4-16 the year prior.)

Trouble was brewing, though.  An arbitrator ruled that the trade made by Wall did indeed violate the terms of the draft and now the NHA was stuck.  The ruling came down that Livingstone was to trade Smith back to Quebec (it's still not entirely clear to me how this was to help the situation).  With Livingstone having no real options, Smith went to Quebec for cash on Jan. 29, 1915.

Smith had scored 17 goals (19 points) in his 10 games under Livingstone and the Ontarios went 4-6.  His replacement was Cy Denneny, who would go on to a Hall of Fame career but at this point was still very green.  Cy would contribute 6 goals in 8 games as the Ontarios finished the season 3-7 (7-13 overall).

After the trade back to Quebec, one might have expected Smith would work his way to the PCHA somehow or other.  This, interestingly enough, never happened.  Smith finished the season in Quebec, scoring 23 times in the remaining 9 games (Quebec went 6-3).  He'd play the next season in Quebec as well before joining the Habs.  He never played a single game in the PCHA.  The claim seems to have evaporated.

The net result was that Eddie Livingstone's Ontarios were forced to trade a star for cash to the benefit of the team that had made the bad trade in the first place.  Quebec not only got Smith, they got to keep Jack McDonald as well.  To my eyes, anyway, Livingstone got hosed for a deal he'd had no part in.

This would not be the last time the NHA would really stick it to Livingstone.  Of the 7 losses to end the season, the one on Feb. 3, 1915 really stands out.  This is the one where the relationship really started to go south.  This, however, is a story for another day.

Tommy Smith's comment on the whole affair was that of all the teams he'd played for, the only one he'd ever really wanted to stay with was Eddie Livingstone's.  Bad, bad man, that Eddie was....

Tommy's career stats from the HHOF:

(Note: The season started on Boxing Day.  I know that some of Livingstone's pre-season moves happened as late as Christmas, but this is a REAL short timeline if Smith was acquired on the 21st.  I have to check the dates as set out by H&N.  I had thought, not having looked at the book in six weeks, that Eddie was in the mix earlier than that.  Somebody's wrong.  Probably me.)