Share All sharing options for: All Hail The Burkies 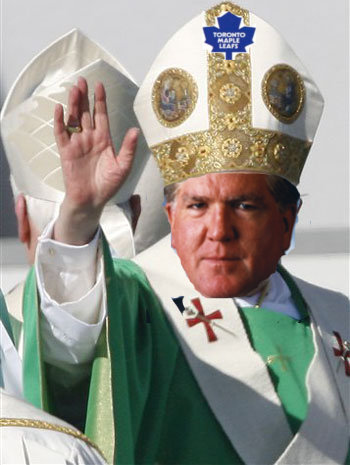 Presenting your Brian Burke Awards for Verbal Excellence from the past week. The Burkies celebrate witty and insightful comments from the community. Use that rec button to mark extraordinary comments. Always remember its an honor to be nominated. After the jump, the gems.

I could pretend to read fake witty banter off the teleprompter but I am going to go off the cuff. At least my dress is fantastic.

I don’t know, but this thread ironically has a surfeit of 3rd-line pervs.

When will PPP package a few together to land the elite mouth-breathing weirdo the Barilkosphere can galvanize around?

Also gunning for the write in, Brunswick Bruiser on Our Luke and Savior:

The righteous shall look upon Him and the wicked shall turn away, blind.
Only a heart marred by doubt is fraught with such discomfort when gazing upon the Way and the Truth.

dang, as if I didn’t need any more reasons to be here more…

and also, Kyle Wellwood is so fat, he jumped up in the air and got stuck. It took the mighty power of Luke’s fist to free him. Go Flyers!

Shield with a thoughtful comment on Zherdev. Remember to rec those:

If we sign this guy, we will be forced to trade someone to the Thrashers to get Antropov back, or have to live forever knowing we could have had the "Nikoline".

I don’t think I could handle knowing how close we could have been to that. Therefore I say don’t sign him for the sake of people like me who know how awesome that would be.

JaredFromLondon on Kerry Fraser, who seems to be a good setup for material:

pay no attention to the man behind the hair plugs

Them – "Um, caller, you told the screener you wanted to talk about officiating youth hockey."
Me – "Sometimes people lie about being screened."

My question:
What did the devil look like when you sold him your soul?

You told us at the start of the show that you’re still haunted by the call. Is that because every night you have to check under the bed for Wendel Clark?

With the most rec's of the week, Brunswick Bruiser with another nickname for Nazem Kadri:

If he scores a goal and has two assists, we could say "The Nazdaq closed three points up tonight."

And Down Goes Brown on Leafs fandom:

It would never happen because the ACC is filled with cellphone-licking corporate sellouts, but…. I’d love to see Naz get his own chant.

Imagine every time he makes a great play, we get this:

From the Notebook of Chemmy Doe:

On PPP today, Mattblack replied to my comment and tried to start a thread. He made small talk, a lonely man talking about the Leafs and other things. I tried to be pleasant and accommodating, but my head hurt from his banality. I almost didn’t notice it had happened, but I suddenly threw the JammieHammer at him. He was not pleased, and I couldn’t stop laughing.

Sleza closes with the zinger on Patrick Kane's arrest:

The Burkies will be moved to next Tuesday as I will be gone on vacation. Someone else will be handling the weekend FTBs. Kisses.