History #14 - Another name you should know - Corb Denneny

Share All sharing options for: History #14 - Another name you should know - Corb Denneny

(OK - after my first botched attempt at this, colour me underwhelmed with the newfandangled story editor, particularly in the way it handles (or doesn't handle) spreadsheet data.  I also think this is better suited to a fanpost, but we'll see....)

Another name you should know - Corb Denneny 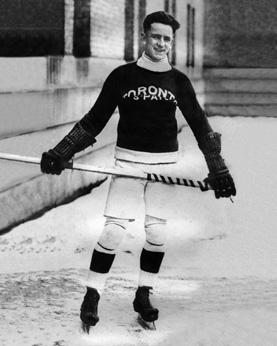 (Corb as a St. Patrick - via upload.wikimedia.org )

In theory, this post was meant to be about the various players Eddie Livingstone picked up as he went to rebuild the Ontarios/Shamrocks and turn them into something that wasn't a disgrace.  Instead, I'll just talk about one of them - Corbett Denneny.

Corb is yet another of the players who gave a lot of time to this city but have been completely forgotten because their time here predates Conn Smythe's purchase of the team.  Scotty Davidson captained the Blueshirts to their first Stanley Cup before heading off to a war from which he'd never return.  Harry Cameron was one of the premier rushing defensemen of his day and put in a dozen seasons with the Blueshirts, Arenas and St. Pats, winning three Cups along the way.  Hap Holmes backstopped the first two Cup victories in Toronto.

And then there was Corb Denneny.

Most people who know the name "Denneny" know it because of Cy, Corb's older brother.  After starting out with Toronto, Cy went on to Ottawa (in a story that merits its own post) and became one of the greatest scorers of his era.  He retired as the NHL's all-time goal-scoring leader and is in the Hall of Fame.

Corb wasn't Cy.  He was just a good, solid pro who could be counted on to give you top-line minutes and production.  He made his debut as a 20-year-old with the Ontarios in 1914-15 and would stay with the various incarnations of the team through 1922-23 (save for 6 games with Ottawa - again, a post for later).  He played in two Stanley Cup Finals for Toronto in 1918 and 1922, winning both of them and contributing 6 goals and 3 assists in 10 games.

(Corb again, sporting the patch from the 1922 Cup win - via www.fedhills.com )

In 1915-16, Corb finished 8th in NHA scoring with 18 goals.  He was 8th again in 1916-17.  As an NHLer, he'd finish 5th, 10th, 4th, 5th and 6th in goals over the next five seasons and generally about the same in points.  Now, these were much smaller leagues, so finishing 5th overall in those days isn't the same as 5th overall today, but these are the totals of a player who could get it done when he needed to.

In 1926-27 Corb, who'd been playing out west in Vancouver and Saskatoon with a pit stop in Hamilton, made his return to the St. Pats.  He was 32 and slowing down some.  He still scored 7 goals in 29 games, though, which put him on pace for 11 (this would have been third on the team - the late 1920s were very, very defensive-oriented).

That season, though, a legal loophole would prevent Corb Denneny from being the only member of a very exclusive club - people to have played for the Ontarios, Shamrocks, Blueshirts, Arenas, St. Pats and Maple Leafs. 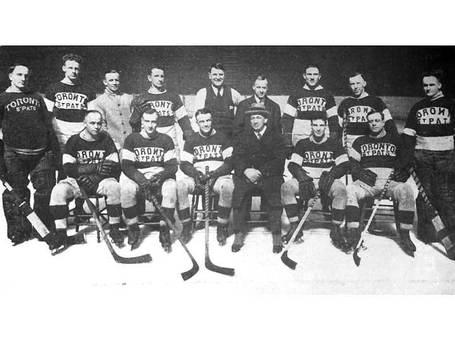 (The Cup-winning St. Patricks of 1922 - looks like Corb is fourth from the left, back row - via www.legendsofhockey.net )

On Feb. 14, 1927, Conn Smythe bought the St. Pats and renamed them the Maple Leafs.  If one reads up on the details of that transaction, there were some problems caused by changing the team name in mid-season.  A number of contracts and transactions specifically dealt with the Toronto St. Patricks by name, and the act of changing that name threw some of those deals into doubt.  One of them was the deal that had brought Corb Denneny back to Toronto.  To me, it appears that Saskatoon took the opportunity to void the trade and get Corb back.

To back that up, the first game under Smythe's ownership was Toronto's 31st game of the season.  Corb played 29 games that year before heading back to Saskatoon.  The HHOF adds this:

Rights returned to Saskatoon (PrHL) by Toronto when terms of transaction were voided, February, 1927.

He was that close.

Corb would play until 1931, mainly in second-tier pro leagues.

The HHOF story on him:

Born in Cornwall, Ontario, Denneny first made a name for himself in the NOHA with the Cobalt and O'Brien Mines teams. He then spent three years as a solid offensive player in the NHA with the Shamrocks and Blueshirts of Toronto as well as the Ottawa Senators. In 1917-18 he joined the Toronto Arenas for the NHL's inaugural season and scored 20 goals in 21 games before helping the club win the Stanley Cup.

During the early 20's Denneny was a scoring star on the Toronto St. Pats. In 1919-20 he scored 24 goals and notched a league high 12 assists. He then registered consecutive 19-goal season and helped the St. Pats win the Stanley Cup in 1922. On January 26, 1921 he became the fifth NHLer to score at least five goals in a game when he victimized Howie Lockart of the Hamilton Tigers. He later spent a year with the PCHA's Vancouver Maroons where he was a second team all-star before returning to the NHL with Hamilton in 1923-24.

The talented winger ventured west in 1924 and played two years with the Saskatoon Crescents of the WCHL. After scoring 18 goals and a league best 16 assists in 1925-26, Denneny was named to the league all-star squad. Denneny was lured back east for the Toronto Maple Leafs' first season in 1926-27 and formed a solid combination with George Patterson and Hap Day. After playing briefly with the Chicago Black Hawks the next season, the veteran scorer led the Prairie League in goals as a member of the Saskatoon Sheiks. Denneny retired in 1931 after spending the majority of his last three seasons with the Minneapolis Millers and Chicago Shamrocks of the AHA.