Share All sharing options for: Thoughts on Teeder Kennedy

Since hearing of his passing late last week, I've been thinking about what I would put into a post on Teeder Kennedy when I finally got the chance to write one.  I don't really feel competent to eulogize him because he's certainly not someone I've ever met and I've only ever heard him speak in a couple of interviews.  Everything I know is second and third-hand or else by reputation.

Still, if there's a person from a past team who would be of serious help to this one, it would be Teeder.  Brian Burke wants a captain who would be a real leader, and it's hard to think of anyone who did it better. 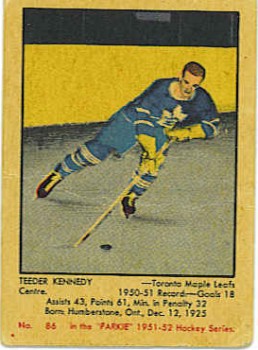 Whenever you read about Ted Kennedy's play, either contemporary or in hindsight, the same kinds of words always appear - tireless, relentless, dogged, driven, fierce, intense - words that describe a player who got everything he did through total effort.  There was no sense of entitlement, no shifts taken off.  Coaches must have loved him.  Teammates and opponents certainly respected him.  Conn Smythe, who fell out with Frank Selke on the trade that brought him to Toronto (for journeyman defenseman Frank Eddols) himself thought he was the greatest competitor in hockey.  (He loved the player, or came to, but was upset about not being asked for approval of the deal.)

The chant, "C'moooooooooooooon Teeder!" by leather-lunged fan John Arnott was originally "C'moooooooooooooon Peter!"  Pete Langelle was a fan favourite and scored the winning goal in the 1942 comeback win over Detroit.  After Pete's retirement, Arnott needed a new person to invest hope in.  He chose well. 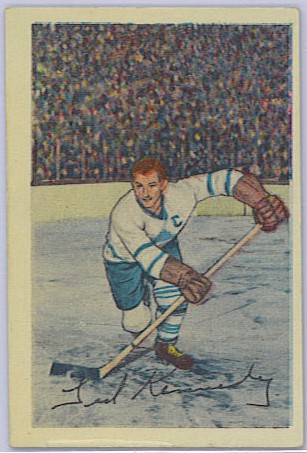 For all Kennedy's gifts, though, skating was apparently not one of them.  There are myriad descriptions of his skating - none of them flattering.  One account describes him as running or galloping on his skates.  The only other person I've heard described that way was Brad Marsh.  Take that for what it's worth.

Teeder himself said that a lot of his game was built around compensating for that lack of skating ability.  He became a great playmaker because his ability to use his wingers masked the fact that he himself wasn't that fast.  It also fit within the "team first" dynamic that defined the Leafs of those days, where the sum was always greater than its parts.  Leading this squad, Teeder became the first NHL player to win five Stanley Cups. 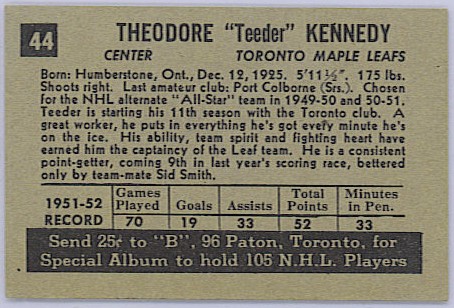 Two things in his career exemplify the regard he was held in during those days.  The 1954-55 Hart win is the first of these.  This trophy is widely regarded as being a "thanks for a great career" win rather than something earned that particular season.  Now, in '54-55, Ted was third overall in assists, but he didn't make either all-star team and I think it was expected if not known that this season would be his last.  Some look at this as a trophy unearned.  To me, to have the voters for arguably the most important award in the sport decide that your career deserves a special moment of recognition means something more than simply having a big year.

The other came later, in 1956-57.  The Leafs were ravaged by injury and Ted came back to the team to help out.  The captain that year was Jim Thomson, a great Leaf in his own right and a player whose Leaf tenure stretched back almost as far.  Thomson immediately gave the 'C' back to Teeder.  There was no question of this.  When other Leaf captains like Gilmour and Clark came back to town, they got an 'A' if anything at all.  For that team, if Teeder was on it, he was the leader.  There was simply no questioning this.

When he became captain in 1948, he wasn't yet 23 years old and was the youngest captain the Leafs had ever had.  Rick Vaive would also be named captain at age 22, though I can't tell who was younger because I don't have an exact date on Kennedy being named.  It was close. 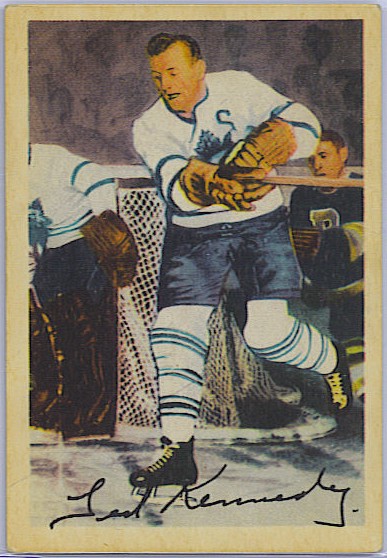 During the 1950 playoffs, the Leafs faced Detroit as the reigning three-time Cup winner.  In the first game of the series, young phenom Gordie Howe went to check Teeder along the left wing boards, missed and ended up going face-first into the dasher.  He would be hospitalized with a fractured skull and lacerated eye.

The charges from the Wings bench were immediate: Kennedy had caused this.  He'd done something to Howe.  He was accused of tripping Howe.  He was accused of butt-ending Howe in the face, despite being a right-hand shot (therefore the butt-end of his stick was against the glass).  The most recent version I've heard (promoted by Gordie himself, though I don't know if he recalls this or was told this later, the first time I heard this variation was 40-some years after the fact) was that Kennedy was making a backhand pass and the follow-through clipped Howe near the eye just as he was making the check.

The series that followed was very bloody as the Wings took every chance they could to get back at Kennedy.  He was hit over the head, slashed around the face, anything they could or often couldn't get away with.  He never backed down, though the Wings won the series in seven.

Though Howe recovered and seemed to hold no ill will towards Teeder, the same could not be said for his teammates.  Ted Lindsay in particular rode Kennedy for the rest of his career.  When you consider that teams played 14 times per season, that added up.

Leaf defenseman Gus Mortson would up playing for Detroit many years later.  One day on a golf course with Jack Adams, he was asked for his take on the whole Kennedy/Howe affair.  When Mortson said that the Leaf story had always been true, that Kennedy had simply stopped short and Howe had gone in front of him, that basically was the end of Gus as a NHL player.

The whole Howe incident doesn't fit with the rest of the Kennedy profile.  While he was a fierce competitor and tough in terms of the punishment he'd take, one word you never hear associated with him is "dirty."  Without any form of video evidence, it falls to everyone's interpretation. 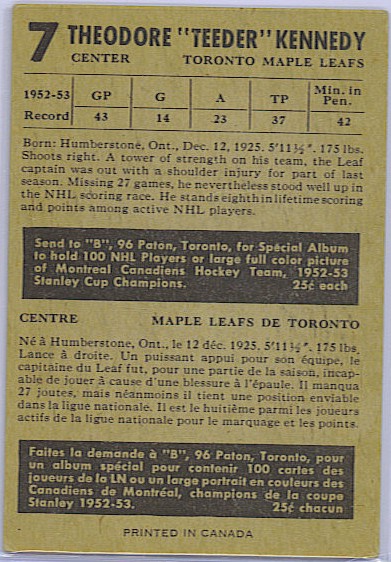 The last interview I heard with him was in the midst of the controversy about the retirement of numbers.  Comments from Dave Keon had surfaced where he took the Leafs to task for "honouring" numbers rather than retiring them.  "Would the Canadiens 'honour' Maurice Richard?"

Teeder was asked for his thoughts on the issue.  He stated simply, "That's not the way we did it under Mr. Smythe."  Retired numbers were for those who died (Barilko) or almost did (Bailey) and he was very proud to have been honoured in the way that he was.  The Habs had their way, the Leafs had their own.

The subtext of it, interesting to me, was that there were very few Leaf players in the world who could pull rank on Dave Keon, but Kennedy was one of them.  Softly-stated, underspoken, but deliberate.

This is how we do it.

A leader by example, always.

Teeder's numbers (from the HHOF):

- Rights were held by Montreal at time of first appearance in NHL.
- Rights traded to Toronto by Montreal for the rights to Frank Eddolls, September 10, 1943.
- Missed majority of 1956-57 season while still in retirement but returned as an active player in game vs. Detroit, January 6, 1957.