While the posts to date have dealt with the controversies that hit Eddie Livingstone's Ontarios/Shamrocks in 1914-15 (though that was nothing compared to what was coming), it should be noted that he made a number of pretty substantial improvements to his team that season.

In terms of the standings, the overall improvement wasn't really that much, from 4-16 to 7-13 (and from last place to second-last).  When you look at it closely, though, the team was 4-3 early and played quite well before the controversies hit in mid-season.  Their overall goal differential was also greatly improved, standing at -20 (up from -57 the year before).  They also had the makings of a good young core, which the old team had never really had.

We've talked about a number of the players already - Tommy Smith, the McNamaras, Corb and Cy Denneny (well, more about Cy later).  There were two other acquisitions of note - Skene Ronan and Percy LeSueur. 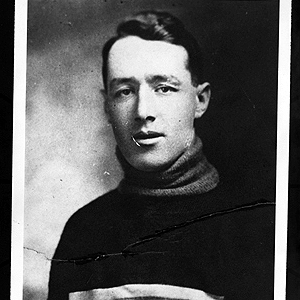 (Skene Ronan as a Hab - via www.legendsofhockey.net )

Skene Ronan was a veteran pro.  Another player who'd spent time with the old Toronto Professionals of the Trolley League, Skene's best season had come with Ottawa in 1911-12, where he scored 35 goals in 18 games.  He'd pot another 36 over the next two seasons before being sent to Toronto on Christmas Day, 1914.

Skene led the Ontarios/Shamrocks in scoring in 1914-15.  Tommy Smith obviously would have led them, but Skene was able to pass him by virtue of playing the entire season in Toronto.

He'd play half a season with Livingstone's new team, the Blueshirts, in 1915-16 before being sent off to the Habs, where he'd help win their first Cup. 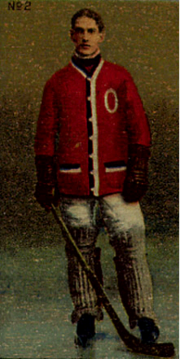 (LeSueur in Ottawa in the glory years - via upload.wikimedia.org )

Percy LeSueur was Livingstone's other big acquisition.  Other than Tommy Smith, he was the biggest name added to the team.

Percy had been the goaltender for a Smiths Falls team that had challenged the might Silver Seven for the Stanley Cup in 1906.  He impressed so much that a little over a week later, he was playing for Ottawa in another Cup defense against the Wanderers.  They lost that one (though Percy won his start), but would win again in 1909, 1910 and 1911.  Percy would backstop them all the way through 1914.

By now, though, Percy was getting on a little bit.  He was 33 and Ottawa had a kid named Clint Benedict in the wings.  Livingstone sent veteran Fred Lake to Ottawa and got himself a goaltender.

Percy's number's weren't great-looking, but much as Grant Fuhr came to Toronto and gave the Leafs a chance, Percy kept them in games.  The Shamrocks gave up almost a full goal per game less with LeSueur in there.  The Shamrocks were in a couple of blowouts that greatly influenced his numbers there.  45 of the 96 goals he'd give up came in just four games.

He would play 1915-16 with the Blueshirts, then enlisted in the army and never played again.

Later on, he was part of the first "Hot Stove Club" on the early HNIC radio broadcasts.

The Ontarios Become the Shamrocks

The other odd thing to happen to the team in 1914-15 was a mid-season name change.  The Ontarios wore bright orange uniforms, which in Toronto in those days was a politically significant colour (a badge of Protestantism).  It didn't sit that well with some of the Irish Catholic players on the team and they approached Livingstone about the possibility of changing the team name and colours.  Some time in January, the bright orange Ontarios became the (presumably green) Shamrocks, sort of a precursor to the St. Patricks of the 1920s.

Livingstone was quoted in the papers as saying that the team had been playing well, and if they wanted this and it would help them win, it was all fine by him (that's a really poor paraphrase, but the gist is there).

Looking at their game results, the only time they were arguably playing well was the three-game win streak from Jan 9-16, 1915 that put them at 4-3 on the season. (The change pretty much has to be in January, as Smith, leaving the team on the 29th, referred to the team as the Shamrocks.)

After that hot streak, there was the trouble with the rights to Tommy Smith (leading to the forced trade on Jan 29) and the whole kerfuffle with the defaulted game on Feb 3, when the three McNamaras had to head home to their sick father's bedside.  The Shamrocks also had to get Cy Denneny in and up to speed as Smith's replacement.

Once the smoke had cleared, they managed to split their last six games.  In between, though, they lost seven straight (including the cheesy default game).  The net result was a team that went 7-13, and probably about 3-10 as the Shamrocks.

Not exactly the luck of the Irish.

1914-15 TORONTO ONTARIOS/SHAMROCKS (from Leafstats, which seems to have vanished.  Thank goodness for the internet wayback machine....)

Next - Livvy buys ANOTHER team, and look, it's raiding again.  Uh oh.