A few years after purple fingers were all of the rage in Iraq, 10 months after the United States voted for change and a few days after Afghanistan's predictable mess of an election (seriously, elections are tampered with in the US and you expect a country's first one to be legit? I have a bridge in Brooklyn to sell you) the community at PPP will head to the polls to choose their overlords. Tomorrow in the afternoon you'll be able to choose your overlords for the coming season.

You'll be making a very important choice as the new overlord will set the tone for the coming season. Just like it was vital to hire Brian Burke it will be vital that you vote for me. You don't want to change horses in mid-stream for a donkey. Or sell out to crazy liberal West Coasters. Or have cutting sessions become part of the community.

After the jump you can see the four groups' campaign buttons courtesy of OdinMercer of Five For Howling.

SkinnyFish has been hard at work crafting messages for all of the community's constituents so find the one that best applies to you and use that as your reason to vote PPP/SkinnyFish:

Blurr and Wrap say they're from the West Coast; but we all know the only west coast that matters is that of Lake Ontario.

Chemmy is a eunuch!

Sure Chemmy's dog is named Wendel Bark, but he likes the smell of my crotch better anyway!

And it's certainly not an election without an informative ad: 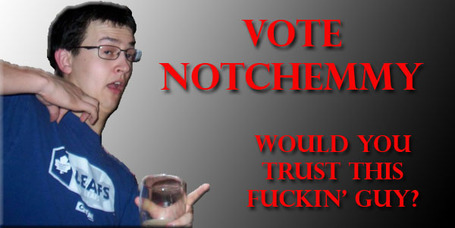 I think that we all know the answer.

And what do we have to say to claims that we've gone negative?

Keeping it positive is for pregnancy tests. Negative all the way baby!
Vote PPP/SkinnyFish – Free condoms for everybody*

*Only if we can pass our legislation through the Senate

Vote Chemmy! You won't be sorry for long!