Talk to Your Doctor About DDoSS

Share All sharing options for: Talk to Your Doctor About DDoSS

If you're anything like me, and lets be honest, with all my charity work, how could you be, you're someone who loves the summertime. Long, hot days. Short, steamy nights. Tops go down and tops come off. With all due respect to Autumn, it's the sexiest, sexy season. So, that all said, let me also add: BORR-RING.

This year, there are certain, special affectations which fall under the banner of Dog Days of Summer Syndrome™. These symptoms last precisely from the closing of Tomas Kaberle's trade window, to the first time a member of the creep-cabal of Berger/Cox/Simmons makes the "joke" that since it's pre-season, the Leafs are tied for first in the league.

Here's a major DDoSS symptom: Sitting at work refreshing the NHL page at TSN.ca 700 times a day between noon and 4. Because of this, it must be a happy time for the the good people at Coldwell Banker right now, because their click-through rate is going through the roof! There's nothing else to look at. Seriously nothing epitomizes the lack of hockey news going on more than hoping there will be a development in the Phoenix Coyote's Don't Have a Lease and Might Have toZZzzz-zzz-zz...

I'm so desperate for any hockey information, that I've been doing something I never, and I mean NEVER do: read about the Ottawa Senators. See, I don't even like to acknowledge the Ottawa Senators, so that usually precludes reading about them. But during the long, long summer one learns that the motto of sufferers of DDoSS is that beggars can't be choosers.

So for the first and almost certainly last time... have you seen what's happening with the Senators lately? Man, they are way worse than I thought they'd be! OK, that's a lie because given half a chance I'd tell you what an ugly, gutless bunch of assholes they are, but wow, everything around them is awful! 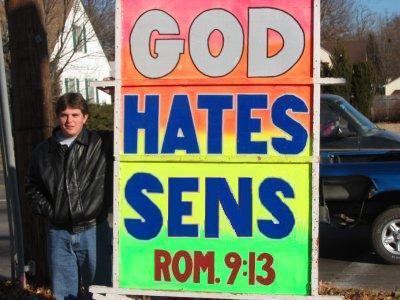 Well, that makes it unanimous

Have any of you been reading Don Brennan? Brennan, a Sun Media drone with a soul patch, must believe in karma, because the Universe is forcing him to write about the Senators. Lately he's been covering the Dany Heatley thing I'm loving every minute of situation, and, like everyone else who writes for that paper, is bad at his job. Doing away with such dull and antiquated notions as journalistic integrity, impartiality, and that whole - not putting yourself ahead of the story - thing, Brennan wrote an article after Heatley's "why I done it" press conference, stating,

The 'A' worn by Dany Heatley stands for Asinine.

The reluctant Senator proved he is also worthy of an 'A' for Arrogant and 'P' for Pompous with all the whining he did on a conference call late last week.

Without further delay, his 'A' should officially be removed. If not dramatically ripped off with threads flying everywhere during a ceremony at Parliament Hill.

Ooooo-k. Here's another letter: 'D' for Don Brennan is completely, wonderfully insane. Now remember, this is not a blogger. This is someone paid to write for public consumption. Like the guy who writes out the menu in chalk on the board at your local pub. Only not as good. Brennan went on in the piece, obviously feeling that the article was skewing a little too subtle:

Dany Heatley doesn't need that 'A' on his sweater. He has one permanently tattooed on his chest, right above the spot that those with a backbone have a heart.

Two things strike me about that. The first is that it is absolutely bananas, and the second is that it's the same thing we've all been saying for 10 years now. The moment you put on that ugly uniform, you just get a concave silhouette. But Brennan takes it so personally, as if he were the one showering "Heater" with contractually obligated cash.

There's an interesting thing I've noticed about the way the Leafs and Senators are covered by their respective media followers. Whereas the jackals who feed year in and year out on the succulent body of the Leafs (again, Berger, Cox, Simmons et al) all seem to hate the team, delighting in slanting everything about them downward, the uh, people who cover Ottawa (Brennan, Bruce Garrioch) are all apologists, who herniate themselves trying to ameliorate a rotten, soulless team. I honestly have no idea which kind is worse.