Share All sharing options for: Kerry Fraser: The Divider

As I sit here writing a post about Kerry Fraser, I sit here having a heated argument with someone I've never argued with... about Kerry Fraser. This person, whom I'll call "my 4:00 patient", listened intently to everything Fraser said as he fought for his life yesterday on Leafs Lunch. After telling me her impressions of the interview, which were "he said the non-call had nothing to do with it being Gretzky", and "...he seems like a genuine guy", I gave her my impressions, which were, "You're absolutely nuts", and "That'll be $2700 please".

AM 640 held the interview in its floating studios out on Lake Ontario, pirate radio style. This was because the Leafs Lunch technicians realized that the making of a street-level gallows is very noisy, and those mics pick up everything, so the station had to take it off-shore. After all that fuss, Fraser took calls made by Leafs fans, which is ironic, as he can't stand making calls himself. 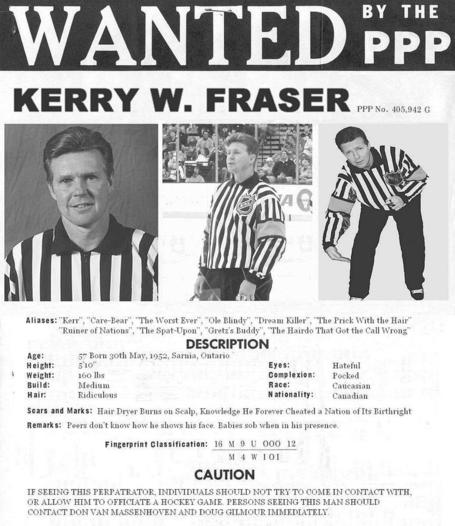 I'm not sure what prompted Kerry to want to talk about himself, but I suspect he's going on a "protect the legacy" tour, kind of like George Bush. I know it's strange to think, but actually those two have a lot in common:  Both men rose to their positions' highest office. Both men have all their hair. Both men totally ruined the world. Stripes never, ever, looked more fitting.