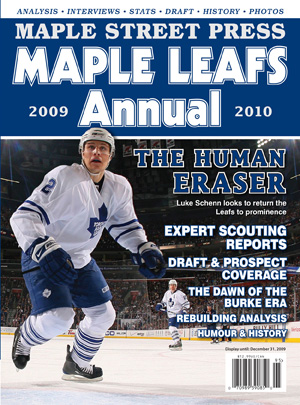 PPP Update:The magazine will hits news stands September 8th. It will also be available at all 'evil' Indigo Chapters stores in Canada as well as wherever magazines are sold in the greater Toronto area, including 'super evil' Wal-Mart, grocery stores, drug stores, and other places with space to fill. Apparently the the only place in the GTA where it isn’t available is the Toronto airport probably because it's in Mississauga and not Toronto.

Alec Brownscombe, of Maple Leafs Hotstove fame, edited Maple Street Press' 2009-2010 Maple Leafs Annual. PPP and I both contributed to the magazine along with some fan favorites like Down Goes Brown, Eyebleaf, Godd Till and Kim Jorn formerly of Cox Bloc, mf37, Torontosportsmedia and more!

The magazine will be available in stores at Barnes and Noble throught North America on August 18th but if you want to pay $5 shipping and handling on an $18 book you can pre-order a copy here.

PPP demanded to have a say, and last night he changed the title of the site to "The Home of Challenge Pissing" so I owe him one. Here it is:

Hey, did you know that it's harder to write without being able to insert links to other stories? It's true. I would say that I have a newfound respect for newspaper journalists but my mom told me never to lie so instead I'll just say that I found a way around it and I can't believe they never thought of it. Just make sure that you read my piece next to a computer and type in all of the websites that are in parentheses. PPP 1, Dinosaur Technology 0. I can't divulge what piece I wrote or even give you a sneak preview but I can tell you that I managed to work in a couple of Catholic references. Jesus would be so proud! - PPP

In essence PPP took the book's singular advantage over a blog, that you can read it on the crapper, and removed it. Anyhow the magazine should be a fun read; you'll be able to take the Barilkosphere with you to the beach, so support some giant corporation and buy it or something.

Also, PPP will autograph any copies you send him.