Share All sharing options for: History #17 - Curiouser and curiouser

For all the fun and frolic that preceded the 1915-16 season, the season itself was comparatively quiet - well, at least until the last game, when things got really interesting.

Cy Denneny began to show the kind of form that would make him a Hall of Famer while putting up 24 goals in as many games and finishing third in league scoring.  Eddie Livingstone continued to show his knack for unearthing good young players adding Duke Keats and Ken Randall to the fold. 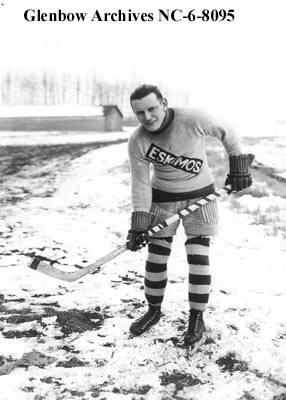 Keats as an Edmonton Eskimo - via ww2.glenbow.org

Keats is something of a lesser-known Hall of Famer because he spent most of his time out west and was only in the NHL for parts of three seasons in the mid-to-late twenties.  He was a great centre, though, and was called by Lester Patrick "the brainiest pivot that ever strapped on a skate."  A perennial all-star in the western leagues, he took the Edmonton Eskimoes (a team that also included a younger Eddie Shore) to the Stanley Cup Final against Ottawa in 1923 losing a pair of one-goal decisions in the process.

As a Blueshirt rookie in 1915-16, Keats led the team in scoring with 29 points while his 22 goals, fifth overall in the league, were two short of Cy Denneny's team-leading 24.

He'd be a Blueshirt again in 1916-17, though a constant source of controversy because the 228th Battalion team also claimed his rights.  After the war ended, he went west where he'd stay until the collapse of the western leagues.  He is considered on of the top players in Edmonton hockey history and is in the Edmonton Sports Hall of Fame. 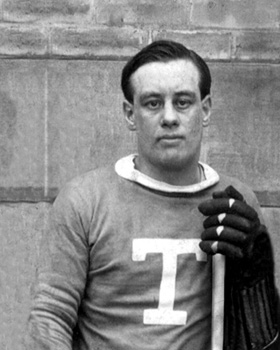 Ken Randall - looks to me like the 1917-18 Blueshirts - via www.findagrave.com

Ken wasn't a rookie when he joined the Blueshirts in 1915.  He'd played for them briefly in 1912 and had been a pro in the Trolley League as far back as 1910.  This was his first real NHA experience though.

Ken was another truculent type. He was a defender who could score some goals and make everyone else keep their heads up.  Apart from a brief Wanderers stint after the forced breakup of the Blueshirts he'd be a Toronto fixture for the next eight seasons winning Stanley Cups in 1918 and 1922.

He would later play for the Hamilton Tigers where he was part of another team forced into oblivion.  His NHL days ended with the New York Americans.

The new-look Blueshirts now had five Hall of Famers (Keats, Cy Denneny, Harry Cameron, Percy LeSueur, George McNamara) amongst their regulars and some good solid players in Corb Denneny and Ken Randall.  They were in a lot better shape than pretty much any team Livingstone had had.  Their goal differential was cut way down as they only gave up one goal more than they scored.

There was only one problem.  They were brutal.

It may have been all the new faces but it took this team forever to gel.  Corb Denneny was sick and missed the first two games and the Blueshirts ended up dropping their first five.  Heading into a New Year's eve tilt with the Wanderers they were 2-9.

Finally, with that game, they got it going a bit.  They started splitting their games and then a three-game winning streak in March put them into a position to pass the Wanderers (who had had a quick start but fell off after an injury to Sprague Cleghorn).  Given the start they'd had, the opportunity to not finish last was a pretty worthy goal.  Better yet, they could pass the Wanderers owned by Livingstone's arch rival Sam Lichtenhein.

Eddie Livingstone's next move is probably one of the most controversial things he did in the NHA.  Remember, Livingstone wasn't one to overtly break rules but if there was a loophole he'd be more than happy to work it.

Normally, any players that jumped from the NHA to the PCHA were deemed "outlaws" and were ineligible to be signed by an NHA team.  The old Blueshirt players, though, had never been given this designation.  Seeing as he still owned their NHA rights (as owner of the Blueshirts) and the PCHA season was over, he put former Blueshirts Frank Foyston and goalie Hap Holmes into the lineup for the last game of the season against the Habs.

It didn't help.  The Blueshirts lost 6-4 and stayed in last, one point behind the Wanderers.  For his part, Livingstone was censured by the other owners.  Exploiting loopholes never goes over well with those who didn't think of doing the same thing themselves.

The part that I find odd about this, and H&N don't mention this, is that this wasn't really a surprising move on Livingstone's part.  If you look at the 1915-16 Blueshirt stats, you see the single game played by Foyston and Holmes, but you also see that Blueshirt-turned-Seattle-Metropolitan Cully Wilson played three.  Now, it's possible that the venerable, recently-departed-but-fortunately-cached Leafstats is in error on this one, but it may be that if Wilson had played without anyone complaining, Livingstone felt quite rightly that there would be no issue with the other two.  (note: The HHOF entry on Wilson does not show these games.)

To me, Livingstone's biggest error was in ignoring the old adage (maybe it was a new adage or a not-yet-coined adage in 1916) that "you dance with the one(s) what brung you."  Why change a lineup that had won three straight and five of its last seven?

At any rate, thus ended the last complete season the Blueshirts would ever play.  The next season would the the Blueshirts' last as well as the last of the old NHA.

One last note: H&N point out that one of Livingstone's suggestions this season was that the NHA adopt a format whereby a first-half champion play off the second-half champion for the overall championship of the league.  This would mean that a team that lost a player half way through (such as the Wanderers) might not see their entire season go down the drain and a team that got off to a bad start (such as the Blueshirts) might still wind up with something to play for.  This was agreed to (for next year) and is the birth of the modern playoff system in hockey.

1915-16 TORONTO BLUESHIRTS (from Leafstats, link above)

Next - it really hits the fan.