Share All sharing options for: Leaf of the Day - Sept 16, 2009 - Alexei Ponikarovsky 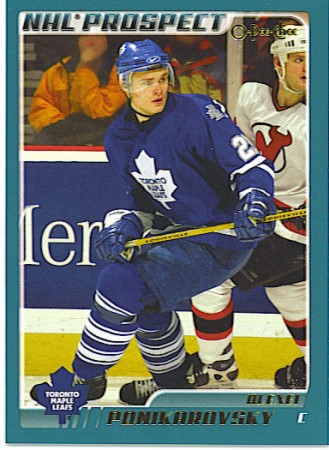 And so it begins again.  Well, it doesn't really "begin" yet, as until the season starts, it's summer re-run time.  This makes life a bit easier on the scan pile and limits the amount of actual thinking I have to do (which can only be a good thing).

For the uninitiated, the Leaf of the Day isn't just a random sampling of Leafs of the past.  It's actually my vehicle for commenting on something or other that's happening right now.  There are a series of unwritten rules that govern who is going to show up on a given day.  Of course, if there's nothing newsworthy to comment on, it's just going to be whoever I'm tired of seeing in the scan pile.  If the Leaf of the Day is Jason Podollan, though, he's probably there for a reason.

We finished off last season with Alexei Ponikarovsky.  Poni topped the list of things I did not expect to see last year.  He is the perfect example of why it's wrong to simply assume this team will have trouble scoring.  In all honesty, how many people would have guessed that Alexei Ponikarovsky would have gone on the best scoring tear of his life - and all it would take was the removal of Sundin and Antropov?

Even now, I have to admit I kind of forget about Poni when I look at the Leafs this season.  For me, he was always one of those people who was just sort of there - a solid, not particularly noticeable winger who was generally reliable defensively and would chip in with the odd goal.  Someone had to patrol the left side on the Sundin line, and it might as well have been Alexei.

As it turned out, the Leafs gave up Moore and Antropov at the deadline and their overall team scoring actually went up, in no small part due to the emergence of Poni.  With any number of question marks on the top two lines, he's got an opportunity to play a major role on this team.  Will he continue to light it up the way he did at the end of last season?  We'll see.

Outside of Kaberle, Alexei now has the most Leaf service of anyone.

The HHOF take on Alexei:  (it might be nice if they updated this....)

"Alexei Ponikarovsky first pulled on an authentic NHL sweater as a 20-year old during the 2000-2001 season. Born in Kiev, Ukraine on April 9, 1980, Ponikarovsky sprouted early, and debuted as a Toronto Maple Leaf, who drafted him 87th overall in the 1998 NHL Entry Draft.

As a 6'4" and 200 pound physical forward, Ponikarovsky has spent each of his seasons since moving to North America being juggled between the parent Leafs and their AHL affiliate in St. John's. In 2002, the former Moscow Dynamo junior player for the Ukraine national team at the Salt Lake City Olympic Games.

Here's some examples of what we can maybe hope for: 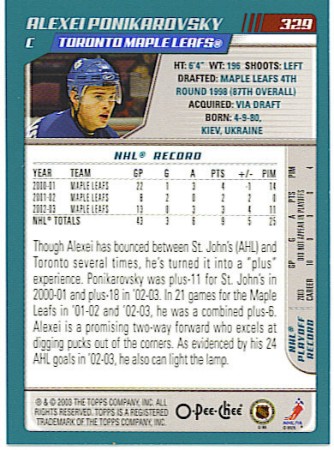