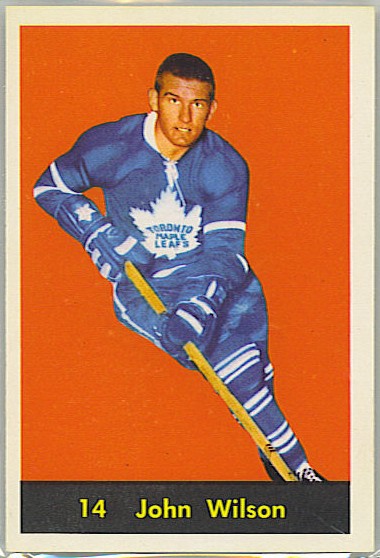 I'm not going to spend a lot of time on Rick Vaive this morning, but if anyone has a good image for a virtual smack upside the head, we'll send it that way.

There's a 50th anniversary this year.  There's an 50th anniversary of something EVERY year, I guess, but this is one we'll actually talk about.  For the record, last year was the 50th anniversary of the Leafs' great run in the last week of the 1958-59 season.  Staring down elimination from the playoffs, the Leafs ran the table and came out of nowhere to grab the last playoff spot over the Rangers.  They then went all the way to the Final.

I had Larry Regan saved for an important late-season game just in case it would be relevant.  Alas.  Larry Regan is still in the scan pile.

This time out, the event is date-driven rather than situation-driven, so we'll get to look at it.  This season marks 50 years since the Leafs-Wings trade for Red Kelly, who was one of the key parts of four Stanley Cup wins in the 1960s.

John Wilson was an excellent two-way player on the championship Wings eams  (and briefly on the not-so-good Chicago teams) of the 1950s.  In exchange for Barry Cullen, he became a Leaf for the 1959-60 season.  It was on his suggestion that Punch Imlach went to the Wings and pulled off one of the larger heists in Leaf history, trading journeyman Marc Reaume for Kelly.

We'll tackle that trade in more detail when the date approaches.

He'd just play the one full season in Toronto before heading to the Rangers in November 1960 (when it mattered) for Eddie Shack, also a big part of those 1960s leaf teams.  Quite the legacy given the shortness of his stay....

- Traded to Chicago by Detroit with Tony Leswick, Glen Skov and Benny Woit for Dave Creighton, Gord Hollingworth, John McCormack and Jerry Toppazzini, May 27, 1955.
- Traded to Detroit by Chicago with Forbes Kennedy, Bill Preston and Hank Bassen for Ted Lindsay and Glenn Hall, July 23, 1957.
- Traded to Toronto by Detroit with Frank Roggeveen for Barry Cullen, June 9, 1959.
- Traded to NY Rangers by Toronto with Pat Hannigan for Eddie Shack, November 7, 1960.

The HHOF take on Johnny:

"Although born in Kincardine, Johnny Wilson actually grew up in Rouyn-Noranda, Quebec where his father took on a job as a miner when young Johnny was just a little mite. It was in the snowy, hockey-laden clime of the north that he and his younger brother, Larry, began their ascent to the NHL.

Both boys joined the Windsor Spitfires of the OHA in 1947 and established themselves as offensive standouts. The two robust siblings continued their parallel careers by hooking up with the Detroit Red Wings' organization by turning pro with their USHL affiliate in Omaha.

After a couple of false starts with the Wings, Johnny finally caught on as a full-time Red Wing in 1952. Larry, on the other hand, moved on the Chicago Blackhawks for the duration of his NHL career.

In the Motor City, Johnny Wilson soon established himself as an extremely durable foot soldier who, over the course of 580 consecutive games played between 1952 and 1961, earned the nickname "Ironman." His feat stood as a league record until Andy Hebenton of the Rangers extended his own streak beyond Wilson's run a few years later.

During Wilson's extended display of durability, he savoured three Stanley Cup victories with the Wings before joining the Blackhawks from 1955 to 1957. He then returned to the Wings for two more seasons of journeyman's duty before moving on for stints with the Leafs and Rangers.

It was during the Rangers' training camp in 1961 that Wilson broke his collarbone and his consecutive game streak at the same time. He managed to complete the 1961-62 season at which time he retired from on-ice duty. 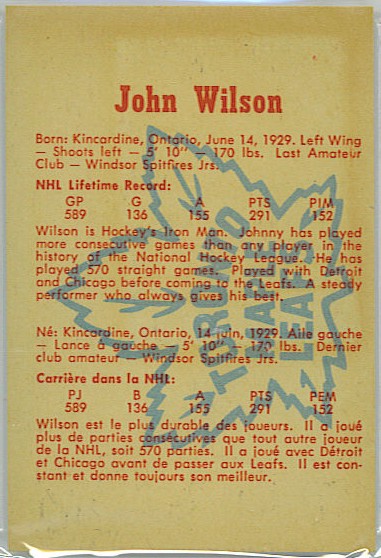