And Burke Said, "Let There Be Goals"

Share All sharing options for: And Burke Said, "Let There Be Goals"

I'm not a religious man, to say the least. This one time a street corner preacher asked me if I needed to have my soul saved, and I answered "It's 11:30". In spite of this, I know when someone is doing the Lord's work, if the Lord is the Stanley Cup, and the work is kicking the shit out of everyone in the Eastern conference.

To that end, I sit at the hem of Brian Burke's garment. Me and 11 other saintly guys - PPP, Chemmy, uh, Trevor, and like, others - follow him around in blue robes loving what he's done with and for the Toronto Maple Leafs. By the power vested in him by his oft repeated mantra of personal truculence, testosterone, and perhaps some sort of magic sword, Burke has made the Leafs "something" other than the serving of milquetoast they were before he entered the GTA. No matter what you think of the deal to make Phil Kessel a Leaf, you can't argue with that. 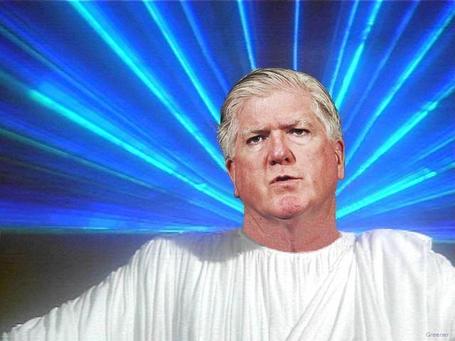 Burke, seen here coming down from his place on Mt. Olympus, has bestowed onto us a team with personality, identity, tons of upside, and now, finally, an answer to the question, "...so who's going to score goals??" With Phil Kessel a Leaf, the team has in its possession a first line all-star who has every intention of continuing to live up to his 5th selection overall. Kessel was picked just behind Jonathon Toews and Nick Backstrom, and you know who the two first rounders Burke gave up for him are going to get picked behind? Their names are Who Knows, and It Doesn't Matter Anymore. It should be more than obvious by now that the Leafs' re-build is a year ahead of schedule, and a big part of Burke's rationale is, all he's trading are mid-round picks. In Leafs Speak, that's Landon Wilson and Eric Fichaud. Toronto now has a NHL proven, 21 year old guy who's going to score goals and push the team into the playoffs, and he came without having to lose a rebound ready Tomas Kaberle.

The Leafs probably haven't given up on a low number, Schenn-level player. 1) Because players like that are so rare they're pink in the middle, and 2) Because Burke traveled to the island of Aeaea to order Circe to concoct a brew to ensure that Daniel Alfredsson becomes sterile. That last one he did just for fun.