Phil Kessel Is Not Walking Through That Door

Share All sharing options for: Phil Kessel Is Not Walking Through That Door 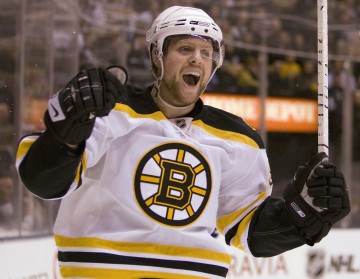 At least, not tonight. Hilariously, on Twitter Archimedies has seen people asking if Kessel will be playing tonight. For now we'll have to live with the guys after the jump. The Leafs' top four defencemen will be in the lineup tonight along with their nominal number one goalie. Public Enemy # 1 (for now) will not be dressed because Colton Orr got the call. Chris Pronger however will be on the ice so the Leafs will have to keep their heads up for Elbows. Stalberg and Bozak get a break while Allison gets another shot to impress.

Last year at this time the Leafs were trying hard and failing. So far this year they've got two wins and a tight loss. It's not scientific but it should give a little bit of confidence to the fans.

If things bog down, I asked Blurr to add overflow and post game threads but I don't know if he can make it and I'm at the game. Therefore, I empower Jared to put up fanshots to continue the conversation. In his absence, just make sure it's only one person doing it :)