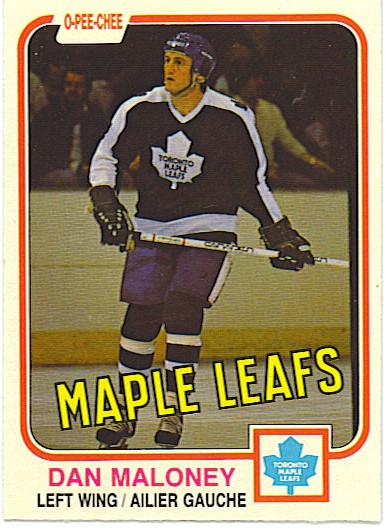 I was listening to the post-game radio callers on Friday night, when obviously the deal for Kessel was foremost on everyone's mind, far more than the game that the Leafs actually had won.  The Leafs' record of trading first-round picks has been a wee bit suspect and almost right off the top someone or other brought forth the spectre of Tom Kurvers.  He mentioned the Luongo pick as well, but it was really the Kurvers one that stuck out.

I have to admit that Kurvers was well on his way to being today's LotD, mainly to highlight the differences from this trade, but the truth is that I think the Kurvers deal has been done to death (I will say in Smith's defense that the '90-91 Leafs were hit by the perfect storm - more on this whenever Kurvers does make his appearance) and there's a better comparison out there - Dan Maloney.

As much as we've been hearing about the possibility of a Kessel deal since the draft, I don't think there was ever a deal that was quite as loudly telegraphed as the Dan Maloney trade.  For much of 1978-79, Harold Ballard told everyone who would listen (and many would as Harold made for easy stories) that the Leafs needed a "Dan Maloney" type of player - a guy with grit and hands and all kinds of honest effort (along with no small amount of truculence).  As time went on, the Leafs came to need Dan Maloney himself.

The only problem was that Dan Maloney was a Detroit Red Wing.

Eventually, in the middle of March, the deal went down - Maloney and a second for two firsts, a second and Errol Thompson, the Leafs' best-scoring Left Wing.  (So note, this is significantly more than Kessel - Errol Thompson had scored 43 goals on Sittler's wing.)

Now, as much as this was a colossal overpayment (Thompson and a second for Maloney would probably have made more sense), it wasn't really a bad deal in the end.  Maloney was exactly what was expected.  He never hit for his peak of 27 goals again, but he was the sandpaper the Leafs wanted and he played a good role in the Leafs' ouster of the Islanders in the spring of 1978.  Thompson would score 23 and 34 goals for Detroit, but was out of hockey by 1981.  The Wings got nothing of consequence for any of their picks.

As has been said elsewhere, the trading of picks only comes out looking bad when the other team gets a Niedermayer out of it.  When it's Mike Blaisdell, Al Jensen and Brent Pederson, your trade comes out OK.

On ice, this trade was probably OK, despite the overpayment.  The negative consequence of the trade had more to do with Leafs management.  After it went down, King Clancy got a call from Punch Imlach, wondering what on earth was going down in Toronto (his language was a tad more colourful).  The best team in the league was Montreal, winning everything with speed and skill, and here the Leafs were dealing a speed/skill guy in Thompson for a plugger like Maloney.

Despite the fact that Jim Gregory was largely forced into this deal, Clancy thought that this take on things made sense, and this was the first step towards the return of Punch Imlach and all that entailed.

I don't think we need to worry this time out.

Dan makes friends with the Wings:

The HHOF take on Dan:

"If there was ever a player who molded his career on a strong work ethic and tenacity, it was Dan Maloney, who always gave the proverbial 110 per cent.

At the age of 17, lanky Dan Maloney played Junior B hockey with the Markham Waxers, where he was one of the team's best two-way players, and always showed an interest in the fisticuffs if need be. At 18, he moved on to major junior, suiting up for the London Knights in 1968-69. The following year Maloney received much more ice time and was gaining lots of attention from NHL scouts, who liked his ability to generate offense while at the same time showing a willingness to take care of the tough stuff, as evidenced by his 232 minutes in the penalty box.

The Chicago Blackhawks selected Maloney with the 14th pick overall in the 1970 NHL Amateur Draft. Maloney played in the Blackhawks organization for almost three years, and became known as one of the enforcers, both with Chicago and the club's minor-league affiliate in Dallas. Late in the 1972-73 season, he was traded to the Los Angeles Kings for Ralph Backstrom.

After spending two years on the west coast in relative anonymity, Maloney was traded to the Detroit Red Wings as part of a blockbuster deal that also saw Terry Harper move to the Motor City in the famous Marcel Dionne trade. Maloney spent the better part of three seasons in Detroit before being traded to the Toronto Maple Leafs at the 1978 NHL Entry Draft. He remained in a Maple Leafs' uniform until retiring in 1982 at the age of 31.

Following his career as a player, Maloney took to the coaching ranks, and served as the bench boss for the Toronto Maple Leafs from 1984 to 1986. He was not out of a job for long, as another former team he'd played with, the Winnipeg Jets, signed him to take over the head coaching duties on June 20, 1986, succeeding John Ferguson who had been filling in on an interim basis. Maloney lasted almost three years in the post, but sub-par on-ice performances and the inability to get past the powerful Edmonton Oilers in the playoffs led to his demise on February 7, 1989 when he was replaced by Rick Bowness. " 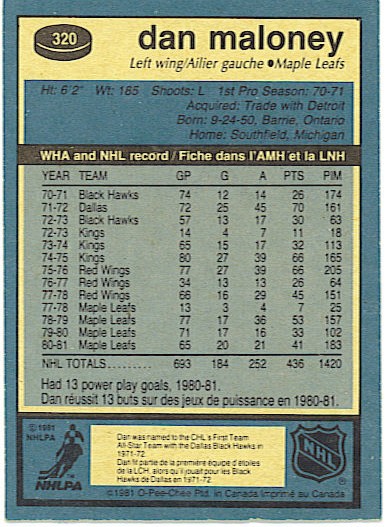