Mikhail Grabovski Welcomes to You, Place of Philthy Phil!

Share All sharing options for: Mikhail Grabovski Welcomes to You, Place of Philthy Phil! 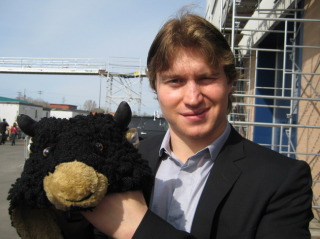 Hi-lo every persons.  I, Mikhail Grabovski am welcoming you to join me very much at new, better PPP!  At old PPP, much joking about pineapples, but at new Place of Philthy Phil, pineapples serious business.  Now we make the end plans for the apples from pine.  Now they know how it feels...
Where was we?  Yes!  Place of Philthy Phil wonderful and joyous celebrations!  Come and join me.  I killed bear for party!  What you brings?  You can't come to parties without empty handedness.  I ask blurr1974 explain for me to you now.

Yes, the celebration continues as we ring in the new and improved PPP.  Thanks to our guest Mikhail for setting the tone to today's FTB.  Like wise men bringing frankincense and myrrh, so to does the Barilkosphere bring gifts for Phil Kessel: